Despite Walker’s early exit, CU secures their ninth win of the season 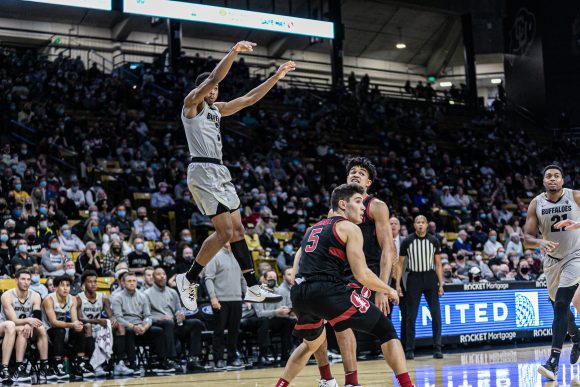 The Colorado Buffaloes (9-3, 1-1 in Pac-12) defeated the California State University Bakersfield Roadrunners (4-4) 60-46 at the Coors Events Center Saturday afternoon in Boulder. Colorado’s ninth win on the season moved them into fourth place in the Pac-12 conference.

Head Coach Tad Boyle said CU knew this game would be slightly more physical than others.

“This team finds a way to keep grinding,” Boyle said. “Tonight was a grinding game and we knew that going in, and that’s the way it was. We took care of business, so now it’s onward and upward. We know what we have in front of us.”

With sophomore forward Jabari Walker exiting the game early in the first half, sophomore point guard Keeshawn Barthelemy led the team in scoring as he tallied 12 points along with six rebounds. Sophomore guard Nique Clifford also picked up his workload as he scored 10 points and grabbed seven rebounds. The Buff’s defense was on point throughout the game, as no single Bakersfield player scored more than nine points. Barthelemy explained how limiting turnovers is crucial for the point guard position.

“I’ve been trusting my work ethic,” Barthelemy said. “It’s just about confidence, my teammates trust me and I trust them back. As a point guard you can’t be turning the ball over a lot, so I pride myself on that.”

CU has been known for their poor three-point shot percentage this season, but that was not the case in this contest. Colorado shot 41.2% from behind the three-point line, nearly matching their regular field goal percentage (42.2). The Buffs’ also recorded 40 total rebounds and 16 assists, outshining Bakersfield’s 34 rebounds and four assists. Nique Clifford said the team saw increased success in their three-point shooting ability.

“We had a week off, so what we focused on a lot was just getting our shots in,” Clifford said. “I think it paid off this week, there was a lot of practices and a lot of work. Some of those shots started to fall tonight, so we just need to keep that up and be more consistent when we’re taking our threes.”

CU still has some loose ends to tighten up. They committed 16 fouls and 14 turnovers, where 10 of those turnovers were steals. Boyle noted the many flaws that came with Colorado’s performance.

“We went on our normal drought in the first half, offensively, that we do from time to time,” Boyle said. “It wasn’t a result of turnovers, it was just a result of not finishing. During a seven-possession stretch, we missed four layups, we missed two wide-open threes, and we missed a post move. But we had good looks, and as a coach that is all I can ask. We just have to finish better. Finishing has been an issue for this team since Costa Rica this summer and it continues to be something we have to get better at.”

The Colorado Buffaloes will face the nation’s seventh-ranked team in the country, the Kansas Jayhawks, on December 21 at 7:00 p.m. MST at the Coors Events Center.