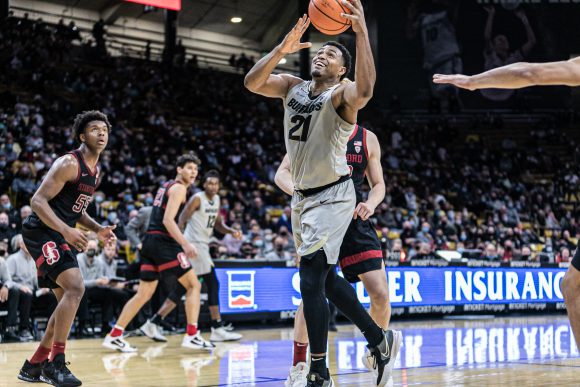 The Colorado Buffaloes (8-3, 1-1 in Pac-12) got their second win in the last three days at the CU Events Center, beating the Milwaukee Panthers (2-7, 1-1 in Horizon league) 65-54. There was a lot of talk about Milwaukee and their top player Patrick Baldwin Jr., but the Buffs were able to limit him to 12 points on 3-13 shooting from the field and 2-10 from three-point range.

Colorado began the game slowly, not scoring for over five minutes. Sophomore guard Luke O’Brien came off the bench and scored nine points. When he entered the game in the first half, O’Brien scored on his first three attempts including a three-pointer which brought the Buffs within one in the early going. His effort seemed to generate a spark of energy and excitement from his teammates and the fans. O’Brien has not played many minutes for the Buffs so far this season, but his impact was felt tonight.

“Coach Boyle always talks about, to me anyway, don’t count the time, make the time count,” O’Brien said. “I felt like I did that today, and I’m just going to build on this.”

Senior forward Evan Battey led the team in scoring and had two crucial buckets toward the end of the first half. CU led the Panthers 28-24 going into halftime. The Buffs shot 12-27 from the field but could only sink one three-point basket on six attempts. The Buffs played strong first-half defense as they held the Panthers to 8-27 from the floor and 2-12 from behind the arc.

Battey and the Buffaloes started the second half strongly and made their first three buckets to go up 35-28. Despite the solid second-half start, the Buffs found themselves in a tie game at 48 apiece with 6:58 left in the game. Sophomore forward Jabari Walker, the Buffs leading scorer, struggled to make a basket on his first six shots. In the second half, it was a different story for Walker as he went 4-8 in the second half, finishing with 14 points and five boards.

“They keyed in when I drove,” Walker said. “I think a lot of teams are starting to do that. The game slowed down for me in the second half. I have to figure out when just to drop the ball off, make the easy pass, and when to drive.”

The game swayed completely in the Buffs favor after Walker had a steal on Baldwin Jr. and took it to the basket for a highlight dunk and a foul. He hit a deep three on his next attempt to put the Buffs up 61-52 with only 1:44 left on the clock.

CU made shots when they needed them, which has consistently been a winning formula for them this season. The Buffs finished 24-56 from the field while shooting 43%. However, their three-point shot has yet to come alive this season as they shot 3-15 from three.

“Offensively, we are making the right plays, making the right reads,” said Boyle. “We have got to keep getting in the gym and grinding and working. We’re going to have a night that we break out.”

The Buffs now have a finals break to improve and work things out before their next game. Colorado will take on Cal State-Bakersfield on Saturday, Dec. 18, in Boulder as they look to improve to 9-3 on the season.