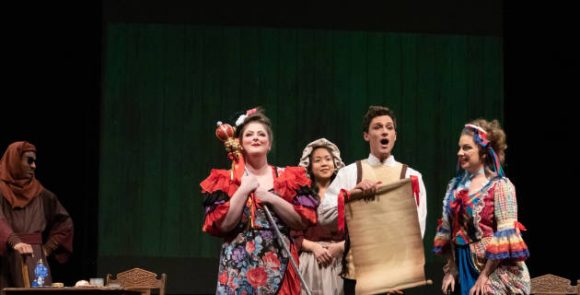 The Eklund Opera Program at the University of Colorado Boulder’s College of Music will present their annual student performance with selected opera and musical theatre scenes, all directed by graduate students. The performance will take place at 6:30 pm on Wednesday, Dec. 1, in the Musical Theater in the Imig Music Building.

“This is a really great way for people to kind of dip their toes in without committing to a two or three-hour show,” Professor Mutsumi Moteki, co-chair of voice and opera and professor of vocal coaching, said. “It’s like an opera and musical theatre buffet. If the audience doesn’t like one thing, it’ll be over in five minutes and something new will start.”

“When the music swells and the notes come out is truly incredible,” Professor Jeremy Reger, assistant professor of vocal coaching, said.

The diverse program comprises scenes from Classical, Romantic and Contemporary era operas in several languages, including Italian, German, French and English, as well as musical theater from the 20th and 21st centuries. It ranges from canonical works by Mozart, Rossini and Monteverdi to contemporary works by Jake Heggie, Stephen Sondheim and Jerry Bock.

During the set changes an announcer will be talking about the stories to orchestrate several seamless transitions. This is not only to eliminate the wait for audiences in between scenes, but it will also provide context for each scene for audience members. This allows the program to have a nice ebb and flow which is a tricky job with this many different genres, composers and styles of music.

The graduate student performers have taken on scenes from grand opera, a genre of 19th-century opera that features large casts and orchestras and elaborate staging. For the graduate students who are more experienced in the field of opera, this has been an exhilarating time, learning new styles and techniques while watching their peers learn and grow as they work through the different styles both singing and directing. Scenes will come from Monteverdi’s “L’incoronazione di Poppea” (The Coronation of Poppea), Donizetti’s “L’elisir d’amore” (The Elixir of Love) and Charles Gounod’s “Romeo and Juliet,” all of which include intricate cadenzas, coloraturas and other challenging operatic techniques. They will also perform scenes from Heggie’s “Three Decembers,” a chamber opera that premiered in 2008.

The undergraduate students will perform scenes that are a bit less challenging, acting as a stepping stone to the grander scenes and offering a valuable learning experience. They will also perform scenes from “L’elisir d’amore,” as well as two other operas, Mozart’s “Die Zauberflöte” (The Magic Flute) and Rossini’s “La Cenerentola” (Cinderella), and two musicals, Bock’s “Fiddler on the Roof” and Stephen Sondheim’s Tony Award-winning “Into the Woods,” which the CU Department of Theater and Dance performed in 2019.

The performance will take place at CU Boulder’s Imig Music Building in the Music Theatre. The cost of admission is free. More information can be found here through CU Presents.

Review: “Guys and Dolls” provides audiences with a lighthearted...

“Guys and Dolls,” the oddball musical comedy, to be...