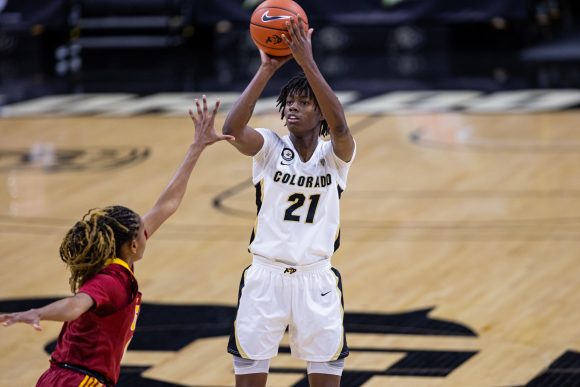 Senior forward Mya Hollingshed shoots the ball over a USC defender during the first quarter of play at the CU Events Center. Feb. 12, 2021 (Nigel Amstock/CU Independent)

For the first quarter and a half of action, the University of Colorado women’s basketball team and Marquette University exchanged blows. Every time the Buffs scored a basket, the Golden Eagles answered with a basket of their own. It took until the end of the second quarter for the two teams to separate when a 9-0 scoring gave Colorado a 33-25 lead heading into halftime.

The Buffs wouldn’t surrender the lead the rest of the way as strong defensive play, and a pair of impressive performances by junior guard Jaylyn Sherrod and senior forward Mya Hollingshed carried Colorado (3-0) to a 69-53 win over Marquette (2-1) at the CU Events Center.

The Buffs made things difficult for the Golden Eagles’ offense throughout the game. The defense pounced on passes and made Marquette work for practically every shot and offensive board. Ultimately it proved too much to handle as Colorado forced 14 steals and 23 total turnovers.

Sherrod was the defensive spark-plug of the evening as she used her quick feet and hands to swipe a team-leading six steals, in addition to scoring 17 points.

“We love to be disruptive,” said head coach JR Payne. “We want those opportunities that will help us go in transition. I thought that everyone was pretty active on the ball, and we played really long. It definitely led to some good offense for us.”

Although the defense was sharp throughout, the offense wavered at times. Early in the 3rd quarter, the Buffs shooting went cold. For nearly four and a half minutes, Colorado couldn’t find the bottom of the net. That opened the door for Marquette, who rattled off a six-point scoring run to slash the lead to just four points with 4 minutes left in the 3rd quarter. After a Colorado timeout, the Buffs regrouped and rattled off a few quick baskets of their own to settle back into control.

“I remember right after the timeout I got an O-board put back,” said Hollingshed. “That was great, and I think that kind of initiated our offense and just led to our defense because we want to get stops. We know in the 4th quarter teams can get hot no matter what, out of nowhere, so we just have to lock in and do what we do.”

The 4th quarter would prove to be the Buffs’ best quarter of the night. They dominated the final ten minutes on both sides of the ball and stretched their lead to 16 points. Hollingshed was the catalyst on offense scoring 11 points in the quarter to put a bow on her 22-point, ten rebound double-double performance.

While the rest of the CU student body will be looking forward to a well-deserved Thanksgiving break next week, the Buffs will have a busy week ahead of themselves. Starting on Monday, Colorado will play four games in seven days.

“I have never since I have been here played back-to-back games like that,” said Sherrod. “So, it will be a first for me as well. But I am excited.”

The Buffs week will begin on Monday night as they face Samford University at the CU Event Center at 6 p.m MT.