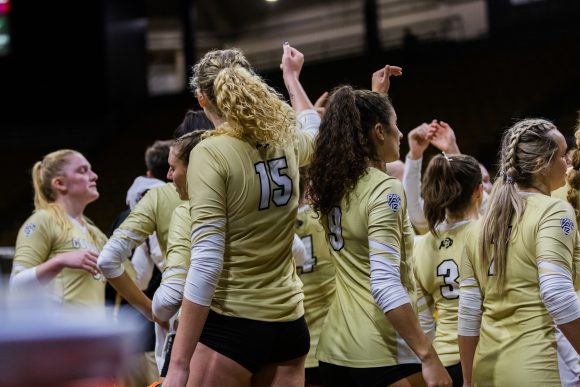 CU Boulder’s volleyball team meets during a time-out during the game against Texas Tech on Sept.10, 2021. (Io Hartman/CU Independent)

The Colorado Buffaloes Women’s Volleyball team continued their struggles over the weekend with losses at Arizona State and Arizona. Two hard-fought matches, the Buffs couldn’t manage to break through for a win, dropping both matches 3-1.

A talented Colorado team led by head coach Jesse Mahoney has faced major challenges within the Pac-12. Despite holding an over .500 record at 14-11, the Buffs have a 5-11 record within the conference. Every loss thus far in the season has come from within the Pac-12.

A major issue on the weekend for the Buffs was their susceptibility to aces. Giving up 9 aces on Thursday against ASU and another dozen against Arizona on Sunday, while putting up just 8 of their own between both matches.

Blocks have remained a massive aspect of the Buffaloes offense. 13 blocks against Arizona State and another 6 against Arizona helped keep matches close over the weekend.

Senior libero Brynna DeLuzio has been key on the back row. With 31 digs on Thursday and another 18 on Sunday, her consistency has been critical to keeping these competitive matches within reach.

The Buffaloes face a difficult week ahead with matches against Stanford on Thursday at 7 PM MST. and Cal on Sunday at noon MST.