Despite an early goal and multiple opportunities, the Buffs draw Oregon 1-1 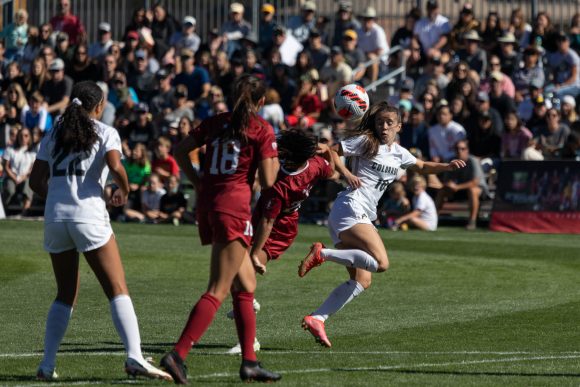 The University of Colorado soccer team scored early, played quality defense, and generated countless scoring opportunities against the Oregon Ducks. Usually, that combination would be the perfect recipe for a Buffs victory. Instead, Colorado found themselves pitted in a battle against a scrappy Ducks squad.

The game marked the second straight draw for Colorado as they also forced a 2-2 tie against Stanford last Sunday. Although the result was the same on paper for both games, the two games were polar opposites. The draw against the Cardinal was an impressive two-goal comeback sparked by the heroics of senior midfielder Shanade Hopcroft. However, there would be no hero for the Buffs in Thursday’s game as they let a much-needed victory to escape their grasp.

Colorado’s lone goal came in the 13th minute of the match. A ball served by Hopcroft on a corner kick bounced off senior defender Hannah Sharts and found its way to junior midfielder Kayleigh Webb who sent a scorcher to the upper part of the net to give CU the early lead. Oregon’s goalkeeper Leah Freeman never had a chance.

When the Buffs returned to action following the goal, they lacked the same level of sharpness, while Oregon meanwhile continued to pound away against Colorado. Twenty minutes after they first scored, the Buffs caved. It happened when the Duck’s Jordan Wormdahl hooked a pass around Sharts. The pass, perfectly timed, was redirected by Ally Cook with her head and past junior goalkeeper Dani Hansen to tie the game at one apiece. “Oregon scores on their first shot in the 31st minute, and we didn’t defend it well. We made mistakes,” said Sanchez. “Having said that, there was still 80 minutes to play after that to get another goal”.

In those remaining 80 minutes, Colorado had ample opportunity to find the net, as they let loose 17 shots on the afternoon. On one of those shots, Webb nearly had another goal in the 54th minute when she launched a bullet to the lower part of the net. The shot, however, was smothered by Freeman. That was the story of the match, as outside of the early goal, the Buffs could not get anything past Freeman as she racked up six saves.

The Ducks’ offense also had their fair share of opportunities to break the draw, including some dangerous balls in the final overtime. In the 101st minute, Hansen blocked a shot from Oregon’s Ally Cook up into the air, but the ball deflected off the top crossbar and back to Cook. Seeking her second header of the day, Cook pounded the ball off her head, but the shot drifted just left of the goal to keep the game tied.

The Buffs now only have four games remaining on the schedule, and with the draw, they find themselves with their back against the walls. If Colorado wants to keep their postseason dreams alive, they likely cannot afford to lose the rest of the way out. If that situation feels like déjà vu to you, it is probably because the Buffs were in a similar scenario last season. That team had to close out the year with a 3-0-1 record to clinch a postseason berth.

CU will look to start a similar streak on Senior Day this Sunday at noon MT as they host a challenging opponent in the Oregon State Beavers.