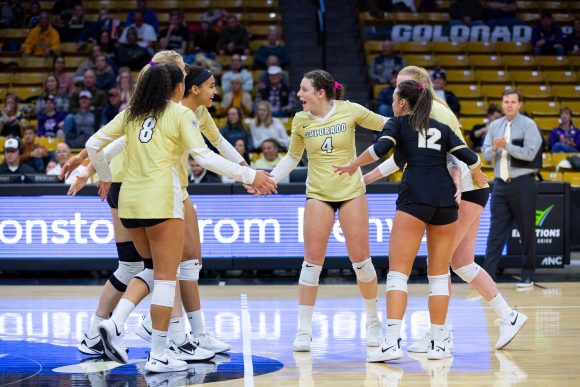 The CU Women’s Volleyball team congratulates one another on another point. Oct. 27, 2019 (Casey Paul/CU Independent)

After their first loss of the season at Washington State earlier in the week, the University of Colorado made its goal to remain undefeated at home against the No. 15 Utah Utes.

The first set went Colorado’s way early on, after an immediate serve error by the Utes. Utah seemed disheveled by the strength of the Buffs against the net, as they put up five blocks in the first set alone. Despite the Utes’ national ranking, Colorado held a significant lead throughout the set, leading to a 25-15 first set victory.

Set two started off on the same foot. Utah was slightly too aggressive at times, leading to multiple attack errors, and gifted points for the Buffaloes. After an 8-1 scoring run, the Buffs hit some bumps. Miscommunication and low energy caused some issues and brought the set to within just three points before breaking away to a 25-17 set two win.

Unlike previous sets, Utah went back-and-forth with the Buffs. Throughout the match, Colorado fed off of the crowd’s energy. Later, as the crowd slightly died off, so did the Buff’s energy. In spite of errors, the Buffs managed a 25-23 third set victory.

However, a sweep over Utah wouldn’t have been possible without protection behind the net. Redshirt senior and libero Brynna DeLuzio and junior outside hitter Jill Schneggenburger were a major help, providing a combined 30 digs for the Buffs.

A critical aspect of the Buff’s success was to hold Utah’s fifth-year senior and outside hitter Dani Drews to as few kills as possible. Drews, a two-time American Volleyball Coaches Association First Team All American, produced 40 kills against Colorado in just two matches last season.

“I think we did a really nice job against Dani,” said head coach Jesse Mahoney. “We did a nice job of overloading our lock on her and slowing her down. They got kills in other places because we left some other attackers alone but we felt like, if we were going to lose, it wasn’t going to be because of Dani.”

The Buffs are back on the court against Oregon next Friday at the CU Events Center at 7 p.m. MST.