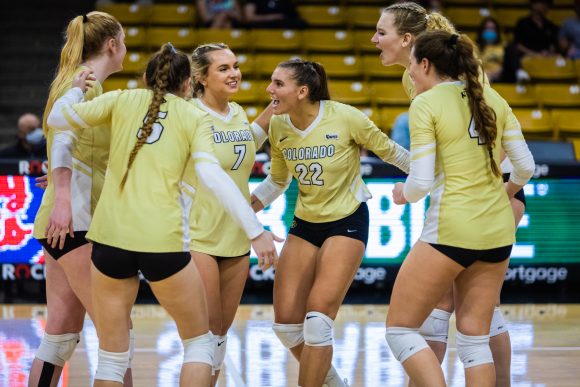 In its first home matches of the year, the University of Colorado Volleyball team fought to continue its young and undefeated season at the 2021 Buffs Invitational.

After a historically poor away record last season of 0-9, the Buffs hoped to prove that they are a threat in both home and away matches for this upcoming year.

Following a strict season amidst the pandemic, Friday morning’s match was the first home match against a non Pac-12 opponent in nearly two years. Fans were allowed to attend as long as they wore a facial covering.

The Buffs took on three opponents throughout the weekend, Texas Tech, San Jose State and Northern Colorado. Ultimately, Colorado walked away holding its undefeated record, winning 9 of the 11 sets played.

Based on early play against Texas Tech, it was easily indicated that the Buffs and Red Raiders were closely matched in talent. Both teams went on scoring runs, but ultimately the team energy and excitement exhibited by the Buffs proved critical as they took the match 3-1.

The Buffs rounded out their invitational with a match against Northern Colorado on Saturday night. Despite the Bears pulling off an upset in the first set, Colorado bounced back to win the next three sets to take the match 3-1.

Colorado was strong on all axles throughout the weekend. Graduate student and outside hitter Leah Clayton was a massive contributor for the Buffs, adding another 48 kills to her already impressive resume.

Unshockingly, senior setter Jenna Ewert had 107 of the team’s 130 assists on the weekend, as well as 21 kills.

The strong weekend performance from the Buffs set a new school record with an undefeated season through seven games thus far.

Colorado looks to continue their win streak through this upcoming week, where they take on in-state rival Colorado State Rams on Thursday at home.