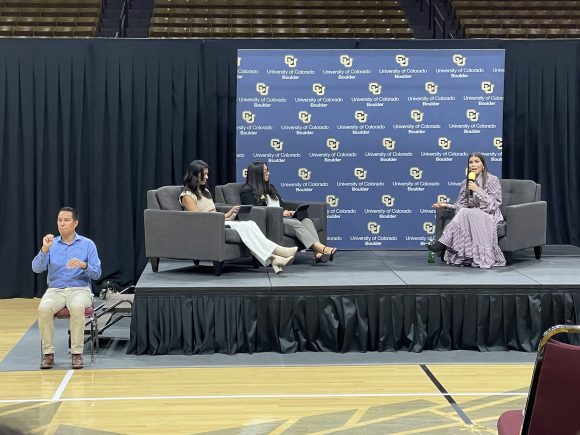 The event was a part of Buffs One Read and hosted by CU’s Cultural Events Board and Distinguished Speakers Board. American Like Me: Reflections of Life’s Between Cultures, edited by Ferrera, is an anthology of essays written by 31 of Ferrera’s colleagues, friends, and people she’s inspired by. This includes Liza Koshy, Lin-Manuel Miranda, Lauri Hernandez, Jeremy Lin, and a number of other prominent figures. Each essay is written to describe growing up in a cross-cultural America and each writer’s uniquely similar experience.

“Growing up, I would have tamales and apple pie for Christmas,” Ferrera explained.

In her childhood, Ferrera lived between cultures. She had both a strong American identity as well as a strong Honduran identity. “My name is America!” Ferrera said. She stated that her entire life up until going to college, she was able to balance two different worlds through transforming into whatever the environment demanded from her. But, she explained that she realized during her entire life of code-switching identities, she was never able to be enough of one. She said she felt isolated in a grey area of cultural identity.

Ferrera went on to explain her struggle with cultural estrangement was painful, lonely and in fact traumatic for her. “I started to realize that I was far from the only person I knew who felt that way.” Through talking to more people and hearing different stories from people even from completely separate cultures than her own, she said she began to grasp that there was a similarity of cultural identity conflict with a majority if not all multicultural Americans.

One day, her book agent came to her with the idea of writing about her experience being a Latina American. She said she was so excited about the book but didn’t want to only do her one story; she wanted other multicultural people she found influential to write about their own experiences as well. “The point was to be able to look out and say it’s not just me, I’m not alone. I have this community of people in this country who have my shared experience, and they’re not just Latina like me.” Ferrera said.

Many young people struggle with self-perception and discovering themselves. It was through embracing her own story as valid and powerful when Ferrera realized that sharing a collection of diverse stories like hers would help so many other adults and adolescents struggling with their own identities.

“If I had reflections of people who I admire having an experience that I recognized as my own, that would have probably changed my life,” Ferrera said.

Her dream for American Like Me would be for it to be in every classroom to highlight the power of all identities. This is often taken away when someone asks reducing questions. She recalled that in college, this was especially true for her and for so many other individuals. “The fact that most of my energy was about trying to make who I am make sense for somebody else was exhausting, can we please form a club where we all just decide we get to be all the things that we are. And so, American Like Me was that club.” Ferrera said.

As a storyteller both on and off-screen, Ferrera stressed the importance of storytelling. With a punch line of “the stories we tell matter”, she advocates for seeing more diversity of stories in the classroom, on the screen, in homes, and on the street. She stated that diversity in our stories is not just checking off boxes of skin color, but sharing different backgrounds beyond a monolithic experience and labels that society has grouped people into. She wants young people to know that they are more than a major, where they’re from, their skin color, and every other label they’ve been put in.

Her passion for storytelling sparked the creation of her organization HARNESS. HARNESS aims to create a more equitable world through the power of sharing and creating diverse narratives. Working with a number of different cultural organizations, her goal is to change the stories our culture hears, tells and accepts.