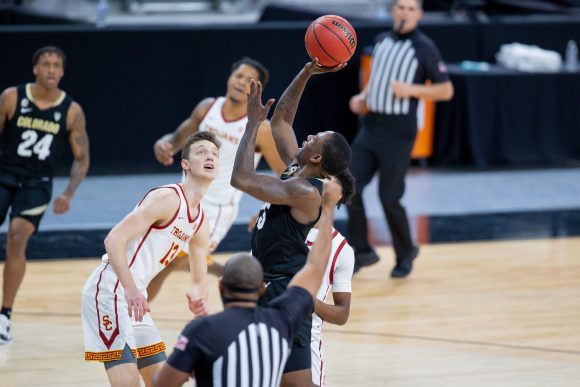 Senior guard McKinley Wright IV elevates the ball towards the hoop during the second half of play at the Pac-12 Tournament semifinal game. March 12, 2021 (Casey Paul / CU Independent)

Although recent University of Colorado Boulder basketball alum McKinley Wright IV was not selected in the 2021 NBA Draft on Thursday, he did agree to a two-way contract with the Minnesota Timberwolves — his home state team — before the end of the night.

By accepting the two-way offer, Wright will be able to play for both the Timberwolves and their G-League affiliate, the Iowa Wolves. Wright will participate in the Timberwolves’ summer league season beginning Aug. 9 before likely spending the majority of his season with Iowa. If Wright gets called up and surpasses 45 days in Minnesota, the Timberwolves will then have to sign him to a full contract or lose him.

After being invited to the NBA Draft Combine in Chicago in June, Wright moved up in many mock draft rankings but was still snubbed from the 60 picks on draft night.

Wright took to his Twitter account to express his determination and gratitude toward the Minnesota Timberwolves organization after their agreement was announced.

so thankful for this opportunity! this chip on my shoulder is so big. @Timberwolves let’s goooo 🙏🏾🙏🏾🎲

Wright had an extremely successful career at Colorado. Over his four-year tenure, he amassed 683 assists (a school record), 1,857 points and 668 field goals. The 6-foot point guard was also the only men’s basketball player in Pac-12 history to earn 1,800 points, 600 assists, 600 rebounds and one of only seven players in Division I history to reach this milestone.

He was selected for the All-Pac-12 First Team in three of his four seasons, was a top-10 finalist for the prestigious Bob Cousy Point Guard of the Year Award and was an Associated Press All-American honorable mention.

The Timberwolves did not have a draft pick on Thursday but have now improved their depth at point guard following their trade of Ricky Rubio.