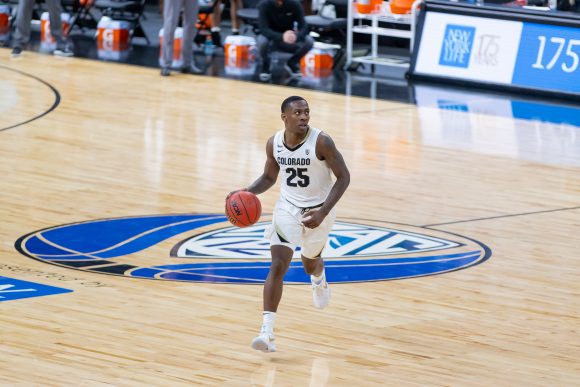 From the moment McKinley Wright IV began his college basketball career for the University of Colorado in 2017 to his final game in March, he proved himself as one of the best players in the Pac-12. Now with a lengthy resume, the 22-year-old is preparing for the 2021 NBA Draft on July 29.

ESPN ranked Wright as the 57th best available player with less than a month remaining until the draft. Wright’s now-former head coach, Tad Boyle, said he has kept in contact with Wright, who is working out in Phoenix.

“Everything I’ve been told from his agent to his workout guy (said) he’s shooting the ball extremely well and playing well,” Boyle said. “I think he showed well at the combine. I’m keeping my fingers crossed. McKinley will be a great pro, he really will. He started that process while he was here in Colorado.”

After being one of 69 players invited to the 2021 NBA Draft Combine, Wright has been occupied with workouts for teams looking to add a key piece in building their future. Of those 69 players, seven of them played in Pac-12.

Wright also had the opportunity to work out for one of the most successful NBA teams of the last decade, the Golden State Warriors. Just six of the combine players were given the opportunity to work out with the Warriors. He averaged 9.8 points, 12.1 assists and 7.5 rebounds per 40 minutes in two pre-draft scrimmages to help boost his draft value.

Wright will look to follow up former teammate and current Dallas Maverick Tyler Bey, who was drafted 36th overall by the Philadelphia 76ers in 2020.

The journey has been a long one for Wright, who grew up in North Robbinsdale, Minnesota. During his senior season at Champlin Park high school, he averaged 23 points, 8.1 rebounds and nearly eight assists while leading the Rebels to a 31–1 record. He set the school record for scoring and won the Mr. Minnesota Basketball award in 2017.

The talented guard continued his success in the fall of 2017 when he came to Colorado. His early days in Boulder began with a bang when he set a career-high 30 points to help carry the Buffaloes to a double-overtime victory over South Dakota State in December. After his inaugural season, he was named to the Pac-12 Conference All-Freshman Team while earning honorable mention to the All-Pac-12 Team and All-Defensive Team. Wright’s 175 freshman assists also shattered Chauncey Billups’ 143 in his lone season at Colorado. Following an impressive first year, Wright continued to find success as he made the All-Pac-12 First Team his sophomore season.

As a junior, Wright scored a season-high 29 points in a 78–76 overtime buzzer-beater win over Dayton, a school he had originally committed to. Wright was once again named to the All-Pac-12 First Team and the Pac-12 All-Defensive Team.

In his final season as a Buff, Wright broke his previous season-high of 175 assists and tallied 185 assists to help set the school record of 683. He also finally got to compete in the NCAA Tournament and led the Buffs to the second round.