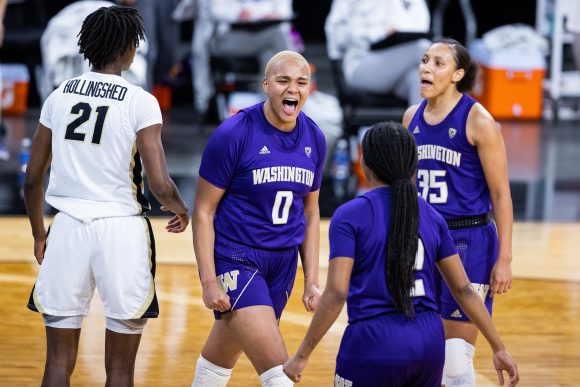 The University of Colorado women’s basketball team began the offseason on a strong note with the acquisition of two Washington transfers.

Sophomore center Quay Miller and freshman guard Tameiya Sadler will join a Buffs squad that is fresh off a quarterfinals appearance in the WNIT. Miller and Sadler will bring chemistry to Boulder as they played together for a Washington team responsible for eliminating the Buffs in March’s Pac-12 tournament.

“We are thrilled to announce the signing of Quay Miller and Tameiya Sadler,” said head coach JR Payne. “They are two of the best young players in the Pac-12. I do not doubt that they will positively impact our program.”

Miller, a 6-foot-3 center, will provide a versatile frontcourt option for Payne to go along with soon-to-be fifth-year senior forward Mya Hollingshed. In her first year at Washington, Miller played 29 games as a true freshman in 2019-20 while starting six of them, averaging 5.3 points, 3.1 rebounds and 1.3 steals per game. She also recorded 14 blocks which were second on the team. In her sophomore season, she was the only Husky to start all 21 games. She showed her scoring chops finishing third on the team with 9.9 points per game while also leading the team with six rebounds per game, 13th-best in the Pac-12.

“We recruited Quay out of high school and have always loved what she brings to the floor,” Payne commented. “She’s a versatile scoring punch. (She) has tremendous rebounding ability and is someone who can defend any player on the court. We can’t wait to add her to our ball club for the next three years.”

Joining Miller, Sadler was a top recruit coming out of high school and was ranked the 98th best player in the 2020 class. She started 10 games during her freshman season and led the Huskies in assists with 2.4 per game. She was second on the team in scoring per game at 10.4 and was Washington’s most accurate three-point shooter at 45.2%. This notable percentage was good for the sixth-best in program history and the best ever by a Husky freshman. Sadler also won Pac-12 Freshman of the Week honors in November when she averaged 17.5 points, five rebounds and shot 60% from the field. She was a prominent problem for the Buffs during their meeting in the Pac-12 tournament as she dropped 18 points and eight assists to knock off CU.

“Tameiya was one of the top-scoring freshmen in the Pac-12 this year, and she certainly lit us up when we played,” Payne said. “It will be great to have her playing in the black and gold this year. I love Tameiya’s competitive spirit and know that her varied skill set will add depth and a scoring punch on the offensive side of the floor.”

Sadler will join an already formidable backcourt with Pac-12 All-Freshman guard Frida Formann and sophomore guard Jaylyn Sherrod. All three expect to be keys for the Buffs’ success next season and in the years to come. Payne alluded to the importance of building a deep roster for the high-level competition of the Pac-12.

“Adding quality depth in this offseason was a huge priority for our ball club,” Payne said. “We certainly have done that with Quay and Tameiya.”