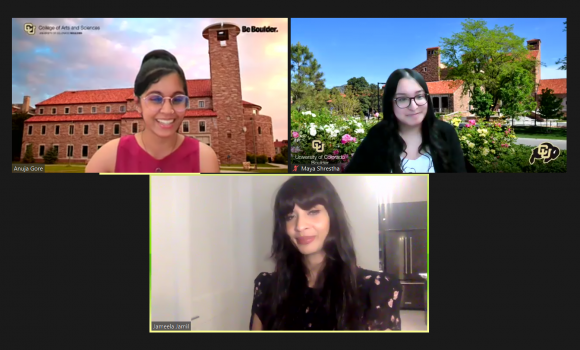 On Thursday, April 8, the University of Colorado’s Cultural Events Board hosted a virtual talk with writer and actress Jameela Jamil. The actress, known for playing Tahani Al-Jamil on “The Good Place” and for hosting “The Misery Index”, covered topics ranging from representation to pizza toppings.

“I feel as if my 12-year-old self, creepy as this sounds, is always watching me,” Jamil said in reference to representation.

As a young South Asian female, there were not very many people to look up to in terms of visual representation. Now, as a popular actress and activist, Jamil keeps her younger self in mind as she looks back on how far she has come.

“The Good Place,” a philosophical comedy about what happens to four young strangers after they have died and subsequently end up in the Good Place, was Jamil’s first audition and TV series. When asked what she had learned from her experiences and the philosophical theories often discussed on the show, Jamil commented on how she made a conscious decision not to be like her character, who often thinks about the impressions she has left on the people around her and their view of her.

“It’s been one of the greatest challenges of my life, being able to discard that coding that was put into me as a kid, that it is my responsibility to be liked, approved of, understood and believed by everyone,” Jamil said.

“The Good Place” had an overall motto that Jamil took to heart as well: one should always try to be even just a little bit better tomorrow than the person you were today. Having constant incremental progression is something she thinks about often.

A majority of college students filled the webinar. Jamil touched on how she found her direction and gave advice on how students can strive to do so as well.

“The only thing I can definitely say that one should work towards that will benefit every area of your life is just working out who your authentic self is,” Jamil said.

Jamil noted that for people in marginalized groups, this is particularly important. The “toxic standards,” as she phrased them, can be difficult to separate from because they are indoctrinated in society. Finding your true self can be a way to remove yourself from those standards.

Between each profound statement, Jamil also laughed and cursed, making the environment of the webinar joyful and free. At one point, she even muted for a minute, standing up to get her ordered pizza from the door, prompting the question of her favorite toppings (pepperoni and Margherita).

Jamil has also launched a movement and social media platform (@i_weigh) which encourages people to feel confident and comfortable in their own skin. She mentioned that children should learn social media literacy from a young age in order to combat body image struggles.

“When it comes to things like mental health and body image, you need to teach them (children) what is real and what isn’t, because most of it isn’t,” Jamil said.

Even with covering these powerful topics, Jamil left with notes of hope and comedy.

“If you’re having a shit time at uni, learn that it does get better. I promise you there’s a big ol’ world out there beyond those walls,” Jamil said.