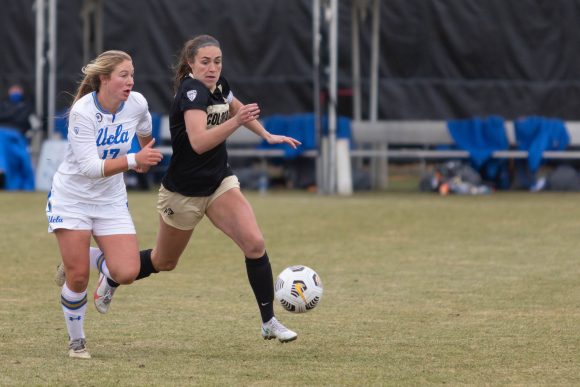 UCLA’s senior midfielder Delanie Sheehan chases after the ball as CU’s junior forward Libby Geraghty gains control of it during the second half at Prentup Field on March 12, 2021. (Kara Wagenknecht/CU Independent)

Move aside March Madness, it’s time for April absurdity. There are only two weeks left in the women’s college soccer season and with the NCAA tournament shrunk from 64 to 48 teams this year, schools all over the country are feeling the pressure.

While a small handful of programs can sleep soundly knowing that their postseason bid is already expected, many teams are in a mad scramble to the finish. Perhaps nowhere is this truer than in the Pac-12 conference. In 2019, the Pac-12 sent nine teams to the NCAA tournament. However, with 16 fewer at-large bids this year, it is likely that the Pac-12 will have to settle for sending just the top five or six teams to the tournament.

What the Buffs need to do

CU has three games left this season, all at home. No matter how the numbers are crunched, CU will have to go 3-0 to have a chance at the NCAA tournament. They could possibly still go 2-0-1 and with the help of some other results finish in the top six, but that scenario is much more unlikely. Arizona, Arizona State and Utah stand in the way for Colorado.

The Buffs kick off their quest for the postseason on Friday at home against the University of Arizona Wildcats. It goes without saying that this game is a must win for the Buffs, they can’t afford to concede a home draw to the Wildcats. Currently, Arizona is slightly above CU in the Pac-12 at 3-4. A draw could potentially allow Arizona to finish above CU, regardless of if the Buffs win their next two games. Getting a win won’t be an easy task as the Wildcats are one of the hottest teams in the conference. Arizona has won three of its last four games with wins against Arizona State and Stanford. All three of those wins came at home, but the Wildcats will now have to prove it on the road.

If CU gets the win against Arizona, the Buffs will have just one day off until they face the Sun Devils on Sunday afternoon. In a way, Arizona State is the feel-good story of the conference. Last season, they finished dead last in the Pac-12 without a single conference win to their name. In 2021, they have risen all the way to second place in the conference and as a result, they are fairly comfortable in terms of their postseason position. This is the one game that the Buffs could afford to draw, although a draw might leave CU in an uncomfortable position on the final weekend of the season.

The Buffs will close out the season against their mountain state rival, Utah. CU should have some confidence in this game as they have already defeated the Utes earlier this season; a 1-0 win on March 20 with chilly conditions on the road. The Buffs will have to make sure that their earlier win doesn’t make them complacent against the bottom team in the Pac-12.

If CU can sweep the homestand, they will finish Pac-12 play with a record of 6-4-1 and will hope for the best when the NCAA selects its tournament teams on April 19.

What about the rest of the Pac-12?

CU isn’t the only Pac-12 team battling for an NCAA tournament bid. What happens in the rest of the conference’s games is critical for the Buffs. Outside of Arizona State and UCLA, who appear safe at the top of the conference, USC, Stanford, Washington, Oregon, Arizona, California and even Washington State could possibly finish in the Pac-12’s top half. Here are the top four games to keep an eye on:

This offers to be a pivotal, season defining clash for these two teams. As of April 8, Oregon and Washington are tied for fifth in the conference at 3-3-2. The winner of this game will likely finish within the top six teams in the conference and get an NCAA tournament bid. The loser of this game will probably be left out in the cold. But barring a draw, the real winner of this matchup may be CU. If the Buffs go undefeated, CU will finish the season above whatever team loses this match. The one thing the Buffs do not want to happen here is a draw. A draw would mean that the Buffs couldn’t go 2-0-1, they would have to go 3-0 to pass either of these teams in the standings.

Similar to the Oregon and Washington matchup, this game will have serious postseason implications. Due to USC’s and Stanford’s higher conference position at third and fourth respectfully, this isn’t exactly a win or go home game for either side. That being said, both USC and Stanford close out the season against two very challenging teams in California and UCLA. With that sort of competition, the loser of this game will be in peril of going 1-2 in their final three games. This is a game that Stanford especially can’t afford to lose as their RPI rank sits at 104 (CU sits at 42) through April 8. Combine that with a 1-2 record to finish the season, and it may not be looked on well by the selection committee.

California is in an almost identical situation as the Buffs as the Bears sit at 3-4-0 on April 8. Similar to CU, if Cal wants to make the NCAA tournament they will likely have to win out. Cal will also finish the season on a three game home stand. The only difference is that the Bears have a significantly harder schedule than the Buffs as they play UCLA, USC and Stanford to wrap up Pac-12 play. Because of this schedule, Buffs fans are also Bears fans for the next two weeks. If California is able to score an upset in either this game against USC or Stanford on April 16, it will only benefit the Buffs.

The Pac-12 schedule concludes with a thrilling rivalry weekend. Watch for Oregon State, Washington State, Arizona, and California to spoil their rival’s postseason dreams. Any one of those upsets could be the narrow difference between CU making or missing the NCAA tournament.