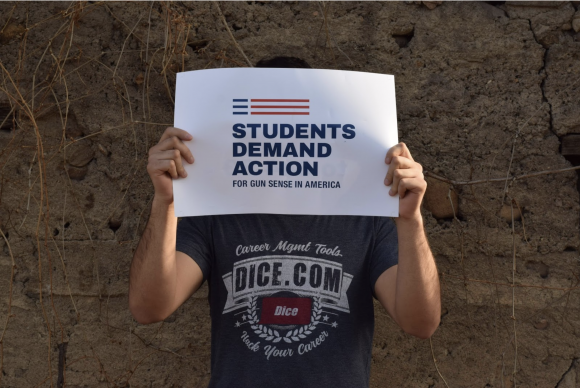 With an ongoing pandemic, riots and mass shootings, 2021 has already been a morbid year for the University of Colorado Boulder. Last Monday, March 22, the mass shooting at the Table Mesa and Broadway King Soopers that took ten people’s lives left students and faculty traumatized.

In response, Students Demand Action at CU Boulder held a protest on the steps of Norlin Library Monday, March 29 at 2:30 p.m.

This group is the Boulder Chapter of a national organization called Students Demand Action for Gun Sense in America. Students partnered with Everytown for Gun Safety, a non-profit organization that advocates for gun control and against gun violence.

One of the student representatives for Students Demand Action, Tim Hernández, started out by empathizing with Boulder’s loss.

“My heart mourns for you. For our community.” Hernández said.

The Norlin Quad was grimly still during the moment of silence for those lost in the mass shooting. The victims’ names were then read aloud:

“What this means for you is that you have to be vigilant and you have to care. And you have to lead with radical empathy. Gun violence is a mental health issue,” Hernández said.

According to the Gun Violence Archive, there have already been 113 mass shootings this year in the United States and it’s only March.

When the CU Independent surveyed students and faculty to gauge their mental health after the mass shooting, many felt a wide range of emotions — some felt angry, horrified and depressed. Others felt numb.

“Truthfully I was numb for a period of time. I lost a friend, Teri Leiker in the shooting. Then it was anger that I was met with, ” said Ciera Dykstra, international affairs and political science major, and member of CU Student Government (CUSG).

“At age 9, I learned about the horrors of the Columbine Shooting. At age 14, a person I thought was a friend became the Arapahoe school shooter. At age 21, my brother was arrested for assault with a deadly weapon. At age 22, I lost a friend to the Boulder mass shooting. It is overwhelming,” Dykstra said.

The past CUSG vice president wrote a letter to the University of Colorado titled ‘CU Boulder: You Don’t Care About Your Students and We Will Not Forget’ which denoted how students felt the university’s response to the shooting was lackadaisical and erroneous.

“They (the university) failed their students, faculty and staff. We all witnessed a mass shooting on Monday and went to class, Tuesday, Wednesday and Friday. I finished discussion posts while crying and had office hours where my professors broke down in tears,” said Dykstra.

In response to the Boulder mass shooting, the CU Boulder administration sent out a list of resources which included references to Wardenburg’s Counseling and Psychiatric Services (CAPS) and the Office of Victim Assistance (OVA).

The CU Independent requested an interview with CAPS but could not schedule one due to the overwhelming amount of crisis calls their office has received. But Jessica Ladd-Webert, an OVA representative, explained the services her office provides:

“We support people in situations of intimate partner abuse, discrimination, harassment, mass violence and assault. I will say that we are a small office, and based on the magnitude and the proximity of this tragic event that people can also seek support from our counseling center,” said Ladd-Webert.

The CAPS website states that students may receive brief counseling which is on average 4-6 sessions. However, most students felt that this isn’t enough, especially after experiencing a year-long pandemic and witnessing a mass shooting. Based on the CUI survey, the consensus amongst students and faculty is that the university needs to put more money into mental health programs like CAPS and OVA.

“What we’re missing is a consistent proactive approach, not a reactive one,” said Hernández.

According to students, this means both implementing more mental health resources on campus and crafting scrupulous gun control laws.