Opinion: It’s time for the United States to move on from firearms 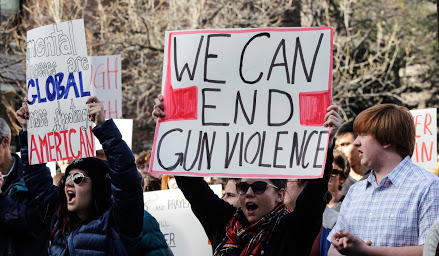 Arming civilians has been a part of the American national identity since the first shot was fired in the American Revolution. Since that “shot heard round the world”, our country has made it easier to acquire deadlier firearms. The results have been catastrophic.

The most recent tragedy left 10 dead after a young man opened fire in a local King Soopers in Boulder, Colorado. Ten people who, in any other developed nation, would likely never have had to worry about being gunned down. Ten people are now dead because of our country’s obsession with guns.

This nation needs to change its gun laws and the culture surrounding guns. Legislatively, the United States must change its laws to be more in line with those of Australia and the United Kingdom in order to safeguard the lives of the American people. Culturally, Americans must forget this notion that one good guy with a gun can save everyone else.

Word for word, the Second Amendment reads, “A well regulated Militia, being necessary to the security of a free State, the right of the people to keep and bear Arms, shall not be infringed.”

With that in mind, the earliest example of gun legislation came in 1939, with United States v. Miller. The court agreed that possessing a sawed-off, double-barreled shotgun was not in the best interest of the well-regulated militia.

Common sense was reversed nearly 70 years later when the Supreme Court ruled on District of Columbia v. Heller in 2008. In a narrow 5-4 decision, they ruled in favor of an individual arguing that “the operative clause should be read to ‘guarantee an individual right to possess and carry weapons in case of confrontation.’”

The Columbine shooting occurred in 1999 and resulted in 15 deaths, including the killers. Following the District of Columbia v. Heller decision, 12 people were murdered while attending a premiere of The Dark Knight Rises in 2012. Fifty-eight were gunned down in the Las Vegas shooting of 2017 and 17 more were killed at Marjory Stoneman Douglas High School in 2018.

Nothing has changed, and shootings have become more frequent.

The United States is the only developed Western nation to be dealing with an epidemic of gun violence. In 2018, just over 14,000 people were killed by homicide involving a firearm according to the Centers for Disease Control. This translates to 4.4 per 100,000 people killed.

Across the Pacific, Australia has a different relationship with guns. In 1996, a gunman in Port Arthur murdered 35 people and injured 23 more. It was the worst mass shooting in Australian history. Australians took action by turning in over 640,000 weapons of all types by the next year under a government-sponsored buy-back.

Americans may look upon this with envious eyes: only three mass shootings have occurred in Australia since 1996. In 2018, the same year as the CDC data, 209 Australians were killed by gun violence. Looking at homicide alone, that number drops to 30, or 0.12 deaths per 100,000 people.

In the United Kingdom, in 1996, a gunman entered an elementary school. Armed with handguns and 700 rounds of ammunition, he opened fire and murdered 16 children and a teacher. Parliament quickly passed a law that banned private ownership of handguns that had a caliber above .22; a provision later expanded to include all handguns.

Every year we go through the same debate after 10, 20, 30 or more of our fellow Americans die at the hands of a gunman yet nothing changes. How many more of us have to die before action is taken?

Thoughts and prayers won’t bring back the nine bystanders and one police officer that were killed at King Soopers in Boulder, nor will they prevent the next mass shooting.

Only legislative action, like the two gun control bills that gained House approval, can prevent more senseless deaths in our country.

Australia and the United Kingdom offer crystal clear examples of the benefits that gun regulation can have for a community. Those countries report far lower gun-related homicides per year and per 100,000 people than the United States.

How can “the greatest nation” in the world allow 14,000 people per year to die senselessly? The latest tragedy in Boulder has proven that the old laws don’t work.

Change has to come, and it has to come now. Americans deserve to be safe from firearms.