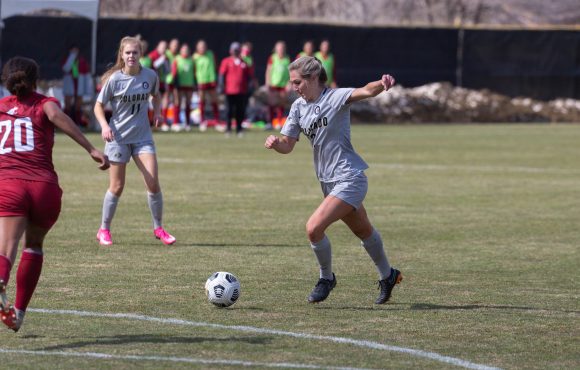 Neither the University of Colorado nor the Washington State women’s soccer team was able to score a goal during regulation on Saturday at Prentup Field. The scoring drought came to an end in overtime with a Cougar goal in the 98th minute courtesy of Makamae Gomera-Stevens who beat two CU defenders and squeezed a shot around sophomore goalkeeper Dani Hansen.

As the Buffs made their way onto Prentup Field to face the Cougars, CU players and coaches wore something different than normal. They all wore black shirts with white lettering that read “Boulder Strong 10.” The shirts, worn out of respect for the victims of the horrific shooting at a Boulder King Sooper’s on Monday, were a humbling reminder that there are things far more important than sports.

“Our conversation with our players after the fact is that this happens so much in our country,” said head coach Danny Sanchez. “It is so sad that we don’t want this to be another statistic that they throw up on a graph two months from now or two years from now. I challenged my players to be the generation that makes a change because my generation has not had enough bravery, enough gumption to make the changes that need to be made.”

The Buffs started the game slow as an aggressive Cougars’ attack dictated the possession for the first part of the match. This allowed Washington State to create a handful of scoring opportunities. However, Hansen did what she has done all season: made big saves. In the first 25 minutes, Hansen saved all four shots on goal, allowing CU to remain competitive in the game. In total, Hansen picked up five saves in the first half.

Meanwhile, chances for CU were few and far between during the first half. One of its best opportunities came off a freshman defender Lawson Willis corner kick in the twenty-ninth minute which found junior defender Hannah Sharts’ head and was directed towards the goal, but the ball was knocked away by a group of defenders.

In the second half, the Buffs looked more comfortable and started to find a bit of a rhythm again. In minute 56, CU had perhaps its best scoring opportunity of the afternoon come up just short when a shot fired by senior midfielder Shanade Hopcroft flew over the head of Washington State’s goalkeeper Marissa Zucchetto. The shot was just a few inches too high and banged hard off the top of the goal post. The game remained tied at zero. 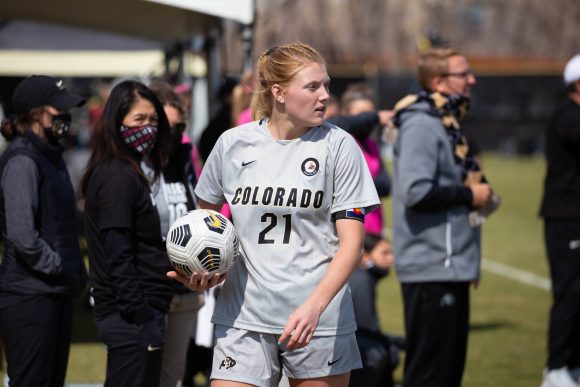 Junior defender Hannah Sharts prepares to throw the ball towards her teammates in the game against Washington State. March 27, 2021 (Kevin Wu/CU Independent)

Five minutes later, a scary scene occurred on the pitch when freshman midfielder Jenny Beyer was pushed hard to the ground by the Cougars’ Mykiaa Minniss as the two players fought for the ball near the sideline. Minniss received a yellow card for her actions. After a couple of minutes, Beyer was able to stand up and was assisted off the field. She did not return to the game.

In minute 70, Hansen made one of her most impressive saves of the day. Charging in from the left side of the field, Washington State’s Alyssa Gray took aim at the lower left corner of the goal. Hansen, without using her hands, miraculously managed to trap the shot between her legs to prevent the ball from going in.

Following that play, the Buffs had a few more chances. Freshman midfielder Shyra James, fresh off a Pac-12 Offensive Player of the Week award, had a header shot in the eightieth minute and another shot soon after that was saved by Zucchetto. As a result, neither side could break the tie and the game headed to overtime.

In the eighth minute of overtime, Gomera-Stevens fired a shot past a diving effort by Sharts which found the back end of the goal. Hansen almost got in position to stop the ball, but the shot made its way around her to give the Cougars the 1-0 win.

“I think that there were times today where we could have had a little bit more composure,” Sanchez said. “It was a highly charged match with both teams leaving it all out there, just like I knew it would be … We had chances to win the match as well, especially after the first 20 to 25 minutes.”

Following just one game at home, the Buffs will be back on the road as they visit Oregon and Oregon State. CU will play the Beavers on Friday at 8 p.m. MST and Oregon on April 4 at noon MST.