Colorado dismantles Georgetown in first round of the NCAA Tournament 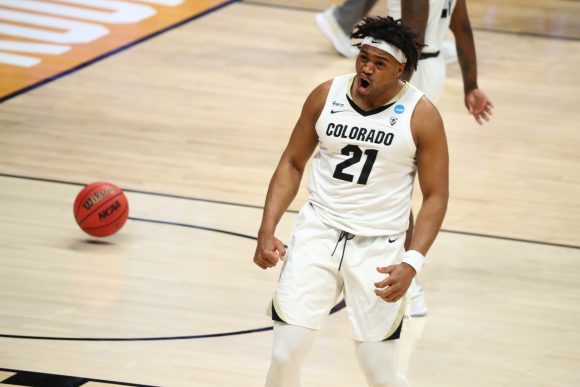 Junior forward Evan Battey reacts against the Georgetown Hoyas during the first half in the first round of the 2021 NCAA Division I Men’s Basketball Tournament held at Hinkle Fieldhouse on March 20, 2021 in Indianapolis, Indiana. (Photo by C. Morgan Engel/NCAA Photos via Getty Images)

The highly touted twelve over five upset did not occur on Saturday afternoon at the Hinkle Fieldhouse in Indianapolis. The five-seeded University of Colorado men’s basketball team handled its business against the 12-seeded Georgetown Hoyas in one of their most complete season performances.

Playing in the NCAA tournament for the first time since 2016, the Buffs beat the Hoyas 96-73 to gain their first tournament win since 2012.

Colorado, led by freshman forward Jabari Walker, got off to a torrid start from behind the arc by connecting on five threes in the opening 10 minutes. Walker dropped in three of the five and added another dunk in those first ten minutes. Walker did not cool of there as he ended up with 24 points on 9-of-10 shooting, including going 5-for-5 on threes.

“We ran a couple of plays that came to me, and I found myself getting wide open,” Walker said. “I got open shots, and just as I continue to say, it is my job to keep knocking them down.”

Walker was not the only Buff knocking down the three-ball as senior forward D’Shawn Schwartz also buried five threes en route to 18 points and 1,000 in his CU career. Walker stated the importance of having everybody on the team hitting shots.

“Later on in the season, our shots were not falling,” Walker said. “They were today, and we knew they eventually would fall because we kept trusting the process, and we had several guys get hot, and it was one of our best shooting performances of the season.”

Another bright spot for CU was its playmaking, as they had assists on 27 of its 34 made baskets. Senior point guard McKinley Wright IV led the playmaking effort, chipping in 13 assists and 12 points, giving him his fourth double-double on the season. Head coach Tad Boyle spoke of Wright’s willingness to simply work with what Georgetown was giving him.

“Georgetown’s defensive gameplan was to make McKinley play in a crowd and not let him score,” Boyle said. “This year, Mckinley has gotten frustrated when that has happened before, and today he didn’t and took what the defense gave him. McKinley did a terrific job of being patient. He played a heady game from a ball screen read standpoint. He didn’t get frustrated with his lack of scoring.”

Colorado improved significantly from its previous game against Oregon State in the Pac-12 championship game as CU hit 60.7$ of its shots from the field and played a more relaxed brand of basketball.

“We have been a resilient team all year long,” Boyle said. “Last Saturday night when we played for the Pac-12 Championship, we weren’t ourselves. The guys were a little tense and too worried about the end game versus just enjoying the moment and letting it all hang loose. Today was a totally different mentality, and we’ve got to keep that; we’ve got to keep being loose and enjoying the moment.”

“The motto today was to play happy and be less tense,” Walker said.

The Buffs took that message to heart, and it showed the entire 40 minutes. Colorado will look to continue its strong shooting on Monday against the four-seeded Florida State Seminoles in the second round of the NCAA Tournament.