Colorado prepares for Georgetown in first round matchup 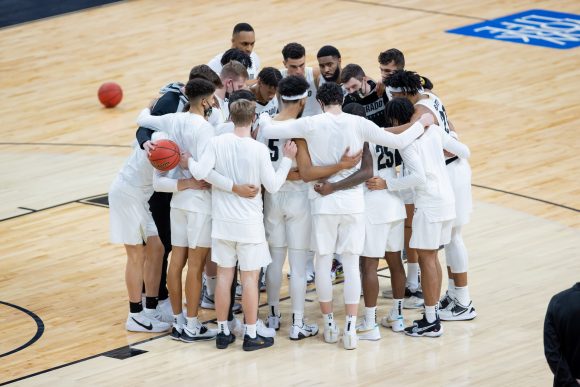 The Buffs huddle together before the start of the second half of the Pac-12 Tournament Championship game against Oregon State. March 13, 2021 (Casey Paul / CU Independent)

The University of Colorado men’s basketball team has been on a historic run this season, breaking several school records en route to the programs’ first appearance in the NCAA tournament since 2016.

Behind the second best free throw percentage in the nation and the best scoring defense in the Pac-12, head coach Tad Boyle and the five-seeded Buffs have earned the right to play 12-seeded Georgetown in the NCAA tournament’s first round. The Hoyas will be no easy task as they are fresh off of a conference tournament championship in the Big East and a dominant victory over Creighton.

Georgetown entered its conference season with a dismal 1-6 record, but finished strong with four wins in the Big East tournament to earn an automatic bid to the NCAA tourney. Headlined by the big men of Qudus Wahab and Jamorko Pickett, Georgetown’s strength and size could give Colorado problems.

“The one thing I’ve learned from watching them (Georgetown) is that they are a true inside-out team,” Boyle said. “They’ve got Wahab inside who’s a really good low post scorer, but they’ve also got guys surrounding him that can shoot the three. They’re very balanced.”

Both Colorado and Georgetown hold little postseason experience as nobody on either roster has played in the NCAA tournament prior to this season. With this, a lot of the pressure of the game will be put on the shoulders of the head coaches. Boyle will be facing off against NBA Hall of Famer Patrick Ewing on the Georgetown sideline.

It will be the first time that Boyle and Ewing have crossed paths in their basketball careers despite playing college basketball at the same time in the early 1980s (Boyle at Kansas and Ewing at Georgetown).

“The fact that (Ewing) played at Georgetown, and that he now coaches at Georgetown is great,” Boyle said. “I think it’s great to have him back in (college basketball). It’s an honor to coach against him, and it’s going to be a great matchup.”

These two respected veteran coaches will take their talented teams to Hinkle Fieldhouse for the right to advance and play the winner of the Florida State and UNC Greensboro matchup that will also be played Saturday.

Wright went on to discuss the fact that he’s been playing in the spotlight from a young age, and now being in the tournament, he’s playing not only for himself, but for his teammates.

Colorado and Georgetown will tip-off on Saturday at 10:15 a.m. MST on CBS.