In a pandemic-ridden season, Colorado secures a five seed in the NCAA tournament 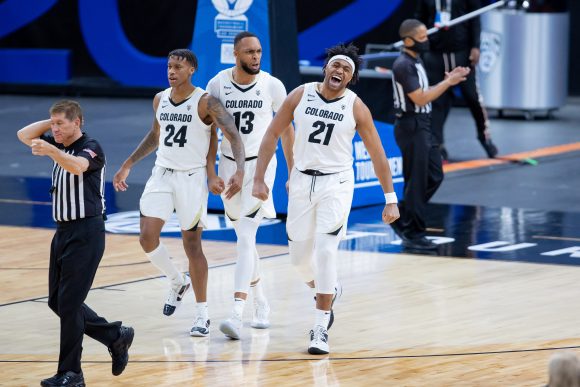 For the first time since 2016, the No. 22 University of Colorado men’s basketball team will compete in the NCAA tournament. Selected as a five-seed, the Buffs’ first round opponent will be the twelve-seeded Georgetown Hoyas on Saturday in Indianapolis.

Colorado’s previous three games came in the Pac-12 tournament, defeating California and USC before losing to Oregon State in the Pac-12 championship game. Including a four game win streak to end the regular season, the Buffs have won six of their last seven.

Head coach Tad Boyle has led CU to its best conference record (14-6) in program history following a disappointing cancellation of last year’s NCAA tournament due to COVID-19. While COVID-19 continues to be a factor in this year’s tournament, Boyle was pleased with how the NCAA is taking every precaution.

“Everybody has dealt with it very well,” Boyle said. “I am thankful that the NCAA has put in a lot of work and have done an unbelievable job safeguarding everybody. (The NCAA has) put this tournament together and given players from all over the country a chance to play the game they love and compete for a championship, which is what they came to college to do.”

As obstacles related to COVID-19 have made it difficult for athletes nationwide, senior point guard McKinley Wright IV has appeared unbothered by anything in his way. Wright earned an honorable mention to the 2020-21 Associated Press All-American team and was named an All Pac-12 first team selection for the third time in his career.

Wright reflected on how playing through a pandemic has affected him and CU’s season.

“It’s been hard, obviously at the end of last year and this full season,” Wright said. “It’s like we were already in a bubble in Colorado, but that’s what we have to do because we have to stay safe. Nobody wants to be that guy to test positive and put our team at risk. We have all stayed disciplined and tough-minded throughout the whole way.”