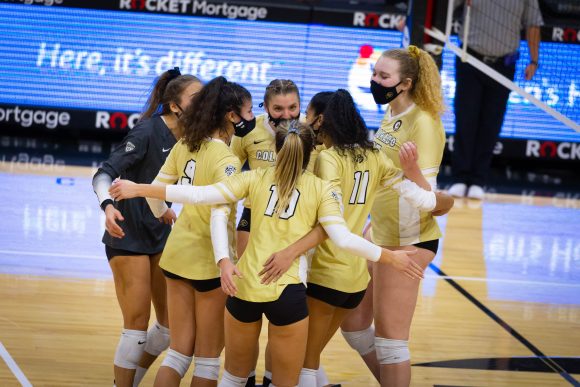 Members of the CU Women’s Volleyball team huddle together in between plays during the game against UCLA. March 7, 2021 (Kevin Wu/CU Independent)

After losing seven straight games this season following a 4-0 start, the University of Colorado volleyball team pulled off a shocking win over nationally ranked No.12 UCLA. The Bruins, who entered the contest at 9-3, suffered their first loss since losing a home match against Washington on Feb. 14.

The Buffs looked like a completely new team, putting together a complete performance. After going winless for an entire month, the team pulled off one of the best wins over the past couple of years.

Against one of the strongest teams in the nation in UCLA, Colorado was able to hold its own the entire match. Although the first set was dominated early by the Bruins, CU battled back from a 16-7 deficit to take a 24-23 lead. After multiple set points, the Buffs ultimately snuck through to a 27-25 first set victory.

Set two looked nearly identical to the first. The Bruins started off with an early lead as the Buffs continued to fall behind before a critical time out. After head coach Jesse Mahoney settled down his team, they began to creep back to tie the score at 13. Unfortunately for Colorado, UCLA was able to hold a slight lead throughout the rest of the set, taking set two by a score of 25-23. 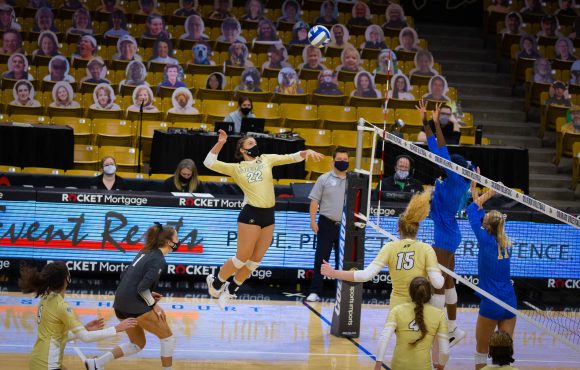 After two strong sets, CU held its ground throughout the entirety of the third.  With a 24-22 lead late in the set, a succeeding block by sophomore right side/middle blocker Sterling Parker and redshirt junior middle blocker Meegan Hart ended the set, giving the Buffs a 25-22 victory.

Colorado held a small lead throughout the fourth set. With huge kills and blocks, the team pulled away with a 25-20 victory in the final set and secured a 3-1 win over the Bruins.

The Buffs were stacked with powerful arms on the front line throughout the match. With five different reliable options, the team combined for 66 kills.

Colorado is back in action on Friday in Tucson against the Arizona Wildcats to build upon their positive momentum.