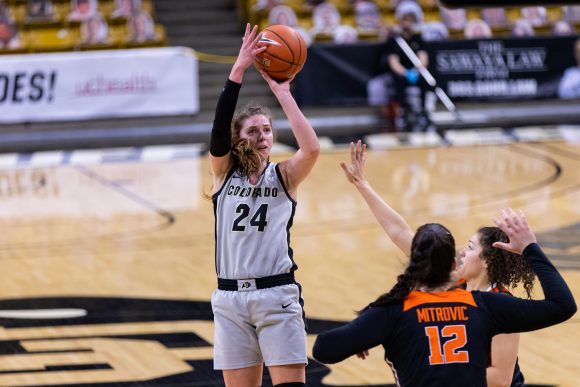 The University of Colorado women’s basketball team will open the 2021 Pac-12 Tournament in Las Vegas on March 3 against the Washington Huskies. As the Buffs are 2-0 this season against the Huskies, this will be an important third matchup between the two teams to kick off the tournament.

CU completed a historical regular season s the Buffaloes tied their best conference record since 2012 at 8-8. The Buffs earned a six seed for the conference tournament, CU’s highest since 2012, leading to a matchup against the 11-seeded Huskies.

Junior guard Aubrey Knight, CU’s leading offensive rebounder with 41, said she expects a challenge heading into the tournament. While the Buffs are riding a four-game win streak into the tournament, it was on the heels of a three-game losing streak. Knight hopes to use the lessons learned in losses as an opportunity for growth.

“I think the biggest thing is that every single game is a hard game, there are no bad teams in this league,” Knight said. “We hope to learn from the mistakes that we made and try not to let those happen again, so we don’t let those games be taken away from us.”

There is certainly less room for error in the single-elimination Pac-12 Tournament.

Another Buff who has found success this season is senior forward Mya Hollingshed. She is the only player on Colorado’s roster that has started every game of the season while leading the Buffs in several offensive and defensive statistics. Her merits brought her All Pac-12 honors for the first time in her collegiate career.

After CU’s last game of the regular season against Utah on Feb. 28 was canceled, Colorado will face Washington for the second time in a row, as the Buffs beat the Huskies on Feb. 21. Head coach JR Payne’s Buffs will have to beat four teams in five days to be crowned Pac-12 champions.