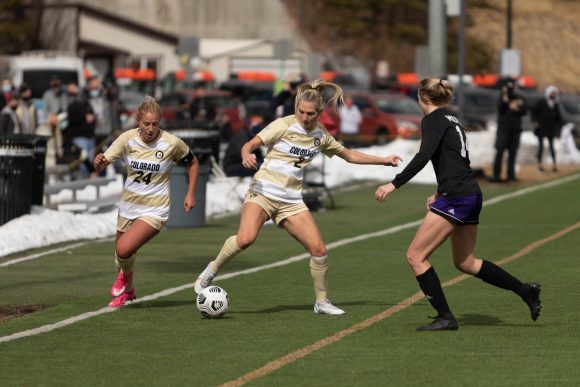 As the clock wound down on regulation, it seemed like the University of Colorado soccer team was destined to play yet another overtime game against the University of Washington. The Huskies had other plans, however, as a goal by forward Summer Yates in the 85th minute lifted Washington to a 2-1 victory on Sunday at Husky Soccer Stadium. Although the game was considered a non-conference affair, the loss dismantled CU’s unbeaten streak as the Buffs fell to 3-1-1.

As a result of Sunday’s loss, CU left the two-game series in Seattle with one draw and one loss against Washington. Head coach Danny Sanchez viewed the trip as a good learning experience.

“(Washington) is a good team,” Sanchez said. “This is a team that was in the second round of the NCAA tournament with a majority of the team back, so we knew it would be a tough weekend. We will build off of some of the positives, but now our focus turns to Cal next Friday.”

At the start of the game, Washington dominated control over the ball, just as they did for most of the game on Friday. In the first 10 minutes, the Huskies got five shots off, including two that had to be saved by sophomore goalkeeper Dani Hansen. In the 17th minute, the CU defense couldn’t hold off the Huskies any longer. Following a long throw-in, the ball found the head of Yates and this time, Hansen wasn’t able to stop the ball which ended up in the back of the net to put Washington up 1-0.

“We are not quite clicking yet in the attack, so when you defend for that long eventually the dam is going to break,” Sanchez said. “I was pleased with how we defended it was just that we were under so much pressure because we didn’t have enough going forward.”

The Buffs didn’t entirely go away quietly though. In the 27th minute, following a throw-in, junior defender Hannah Sharts fired a shot towards the goal but instead of finding the net, the ball banged hard off the right post and was kicked away by the Huskies’ defense.

In the 43rd minute, junior midfielder Kayleigh Webb drew a foul on the Huskies side of the field, giving CU a free kick. On the free kick, freshman defender Lawson Willis found freshman midfielder Shyra James who got behind a defender and headed the ball towards the goal. The high-arcing ball floated from the right side of the goal and was headed past Washington goalkeeper Olivia Sekany in the left side of the goal. It was James’ second goal of the season, and also marked the second time that James and Willis had paired up on a goal this year.

After a 0-0 draw on Friday, Sanchez said CU made a few offensive adjustments heading into Sunday.

“We changed our tactics a little bit and I thought we did a better job of keeping the ball, however, there still wasn’t enough quality and confidence in building and getting numbers getting into the final third,” he said. “That is something that we are really going to have improve on going forward.”

In the second half, the Buffs were continuously put on the defensive by Washington. Despite a handful of opportunities for the Huskies, CU’s defense and Hansen stood strong until the 85th minute. After a foul was called against Webb, the Huskies got a free kick in a similar position where the Buffs scored just before the half. Like Colorado had before, Washington scored on the play. The ball from the free kick was deflected to Yates in front of the goal and she was able to squeak the ball by Hansen.

The goal, which was Yates’ second goal of the game, was the final nail in the coffin for the Buffs. Despite their best efforts in the closing five minutes, CU was unable to find an equalizer as they fell to Washington, 2-1.

CU will look to shake off the loss as they continue their Pac-12 road trip on Friday at 4 p.m. MST against California, followed by Stanford on Sunday at 1 p.m. MST.