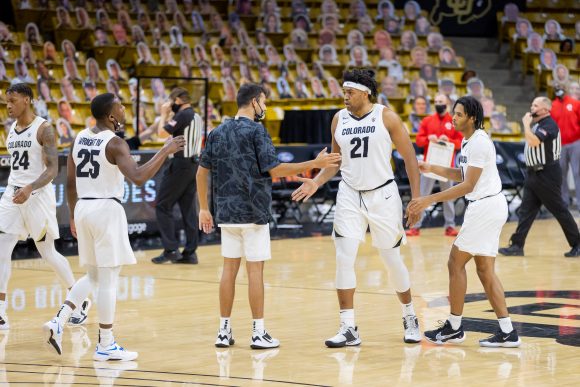 The players high five each other in between plays during the second half of the game. Jan. 30, 2021 (Casey Paul / CU Independent)

As the regular season comes to a close, the University of Colorado’s men’s basketball team looks to make a strong impression heading into the Pac-12 tournament. Coming off a win against Oregon State on Saturday, the Buffs will enjoy a three-game homestand before the postseason begins.

Standing at 17-7, Colorado has won eight of nine games at home this season. Similarly, the Buffaloes have won six of the seven games they have played against non-conference opponents.

The Buffaloes’ typical starting lineup in recent games has included senior guard McKinley Wright IV, junior forward Evan Battey, senior forward Dallas Walton, junior guard Eli Parquet and senior guard D’Shawn Schwartz. When locked in, these five are a force to be reckoned with. CU as a whole is averaging over ten more points per game than its opponent this season. Likewise, the Buffs are averaging more three-pointers made, more rebounds, more assists, more free throws made, more steals and fewer turnovers per game than their opponents.

Wright and Battey are the only two players on the roster to start every game this season for Colorado. They have stood out this season as Wright leads the team in average points per game (14.5) and junior forward Battey leads the team in offensive rebounds (42) and is second on the team in total rebounds (124). The two look to continue their offensive surge as they put up a combined 31 points in their last matchup against Oregon State.

The final three regular season games for the Buffs will be against USC, UCLA and Arizona State. Up first is USC on Thursday. The last time the Buffaloes faced the Trojans, CU won in Los Angeles, 72-62. Colorado has had a history of success against the Trojans as they have a record of 14-6 all-time and are currently on a five-game win streak against USC.

On Saturday, the UCLA Bruins will come to Boulder. UCLA got the better of Colorado on Jan. 2, 65-62. Colorado hasn’t seen much success against the Bruins as they are 6-11 all-time against UCLA. Both USC and UCLA weigh heavily on the outcome of Colorado’s season, as these two teams are atop the Pac-12 standings.

CU was originally slated to host Arizona State on Feb. 4, but the game had to be rescheduled due to COVID-19 issues within the ASU program. The Buffaloes have an all-time record of 12-9 against the Sun Devils dating back to 1962. They will now face off on March 4 to close CU’s regular season.

For Colorado to end the regular season on a high note, head coach Tad Boyle preached on the need for offensive efficiency.

“We certainly (didn’t) make it easy on ourselves in the second half,” Boyle said after CU’s win against Oregon State Feb. 20. “Our offense in the second half in the last few games has kind of gone a little stagnant and dry. In the first half, 52% (from the field), pretty darn efficient. (We) shot the ball pretty well, but our turnovers are becoming an issue and that’s where we make it hard on ourselves.”

As Colorado is averaging 11.4 turnovers per game, Boyle was disappointed in Colorado’s nine turnovers in the first half and 16 for the game.

With an 11-6 record in conference, the Buffs have a slim but possible chance to win the Pac-12 regular season title for the first time in school history. They will need to finish 3-0 with a few further losses by USC, UCLA and Oregon.

Colorado and USC will tip on Thursday at 7:00 p.m. MST at the CU Events Center.