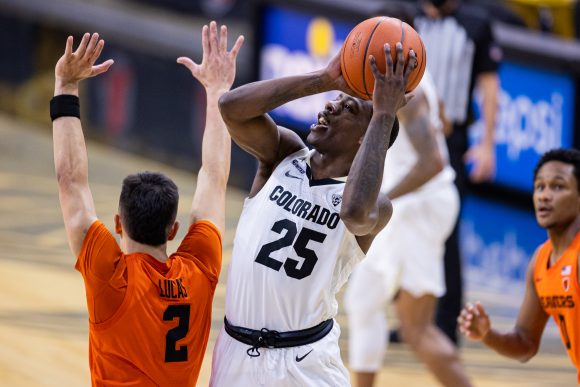 Senior guard McKinley Wright IV shoots the ball over an Oregon State defender during the second half of play at the CU Events enter. Feb. 8, 2021 (Nigel Amstock/Rivals.com)

“This was a must-win game,” said junior forward Evan Battey. “Our team understood that.”

Coming off tough losses to California and Oregon, the Buffs were able to get their fifth road win in Pac-12 play, their most in conference play since the 1961-62 season.

Contrary to their 78-49 thrashing of Oregon State in Boulder on Feb. 8, the Buffs found themselves in a tightly contested game throughout against the Beavers. At points, the Buffs even had trouble finding offense.

Head coach Tad Boyle called the offense in the second half of the game and parts of CU’s previous loss at Oregon on  Thursday “stagnant” and “dry.” Senior guard McKinley Wright IV, however, picked up the slack on offense when the team needed it most.

Wright stated that he has been “frustrated” and “irritated” with how he has played lately while the expectations are high entering the final leg of the season. He added that he needs to step up as the NCAA tournament approaches. Wright took the lead once again on Saturday, and he did so when the Buffs needed it most.

“The best players in the country show up around this time (of year),” Wright said.

Head coach Tad Boyle said that Wright “felt better physically” tonight and that he did what was necessary from arguably the best player on the Buffaloes.

“You need your best players to step up and make plays, and McKinley did that tonight,” Boyle said.

Before Wright stepped up in the second half, the first half saw the Buffs go on an 11-0 run to take a 14-9 lead. Although Oregon State tied the game three times after that, the Buffs would not relinquish control of the game.

Senior forward Jeriah Horne and junior forward Evan Battey both had 10 points on the offensive end. Horne made an enormous three for the Buffs right before halftime to give them a 35-29 lead.

With all the good performances on defense for the Buffs, Battey talked about the way the team plays and how different players can step up in any game. He mentioned that the team has a will about them that “moves person to person.” The will of this team showed itself from Wright on the offensive end, and in the team defense, the Buffs were able to play.

One area that Boyle stressed for the Buffs to improve on is the turnover department. They had 16 turnovers to add to the 17 they had against Oregon. Turnovers have not been an overarching issue for the Buffs this season, but Boyle sees the problem and wants to fix it. He stated that there were “way too many” unforced errors despite the win.

The Buffs have a two-game homestand beginning on Thursday with the Pac-12’s leading team USC Trojans followed by the second-place UCLA Bruins on Saturday.

These two games, along with the possibility of a make-up game against Arizona State, will constitute Wright’s last homestand in his storied Buffs career.

“We got to get these two wins at home,” Wright said.

If the Buffs can find a way to beat USC and UCLA, they will position themselves well for the Pac-12 Tournament in Las Vegas and strengthen their chances at a top-four seed in the NCAA Tournament.

Eric Bean is an undergraduate journalism major at CU Boulder, minoring in Sports Media. In his free time, Eric enjoys playing the piano or a game of Madden. Eric has covered Buffs sports since August of 2019, and joined the CU Independent in January of 2021. Contact: Eric.Bean@colorado.edu | Twitter @ebeancubuff