CU volleyball off to a strong start 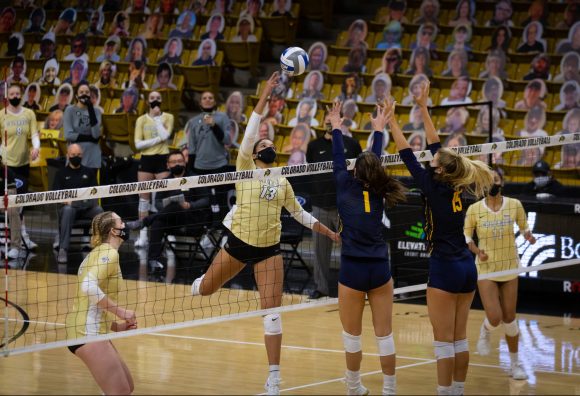 The University of Colorado Buffaloes volleyball team has been on an impressive tear to open its 2021 season. Colorado began the season with a sweep over Oregon State and a sweep over California before dropping a pair to Washington State.

They have outscored their opponents 354-324 and have 37 fewer attack errors, 20 fewer receiving errors and 18 more service aces to support their 4-2 record.

CU has found success this season with the help of a few key players. Sophomore Elissa Alacantara leads the team in kills with 58 at the outside hitter position, while redshirt junior setter Brynna DeLuzio has 79 kills to lead the Buffs.

Colorado found an extremely talented middle blocker in graduate student Rachael Fara. She has been an offensive lightning rod for Colorado’s volleyball team as she is first in the Pac-12 leaderboards in hitting percentage at .463.  Her .667 attacking percentage against California on Feb. 5 remains the highest in a single game in the Pac-12 this season.

Junior setter Jenna Ewert has joined Fara in finding success this season. Ewert leads the team in assists with 199, significantly more than anyone else on the roster. She is also a defensive guru, leading the team in blocks with 24 and averaging over one block per set. She is also second in digs (54) and second in services aces (8). With Ewert and Fara on the court, the Buffaloes have a scary one-two punch.

The next couple of series in the schedule get a bit more challenging as CU hosts the No. 10 6-2 Washington Huskies on Friday and Sunday and then visit No. 22 Oregon to face the 6-2 Ducks on Feb. 26 and 28. Colorado will also have to contend with the No. 7 Utah Utes in mid-March who are currently undefeated at 8-0.