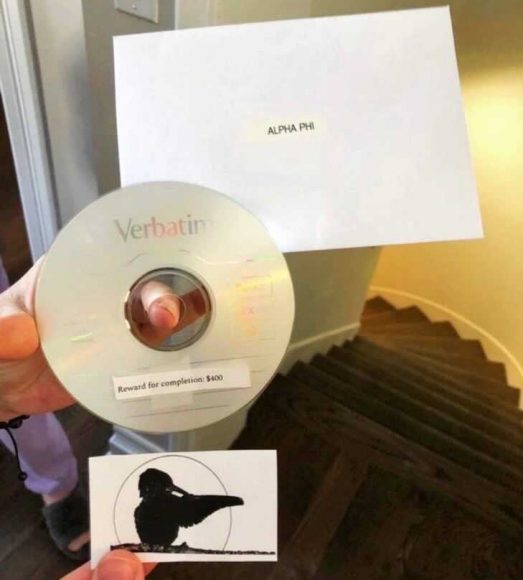 A photo of the contents of the envelope, taken by a sorority member on Feb. 15 (Photo credit Alpha Phi Sorority)

On Feb. 15, fraternity and sorority members woke up to find mysterious envelopes taped to various areas of their properties.

The envelopes, left late the night before, contained cheap CDs and a calling card which was printed with a silhouette of a bird. Additionally, the CDs had a message written on them which read, “Reward for completion: $400.”

The CDs held a variety of different audio files, ranging from sounds of violence to unrecognizable noises. However, several contained audio ripped straight from a specific episode of the CBS crime drama “Criminal Minds.”

The episode involved a former firefighter who sent letters to upper-middle-class victims before burning their homes down, with the victims inside them.

At present, there is no information on who delivered the envelopes. However, both the university and Boulder Police Department have reached out to the affected houses.

At least one sorority house will have a security guard stationed outside until tomorrow morning and later in the week the staff will discuss placing a video surveillance system around campus.