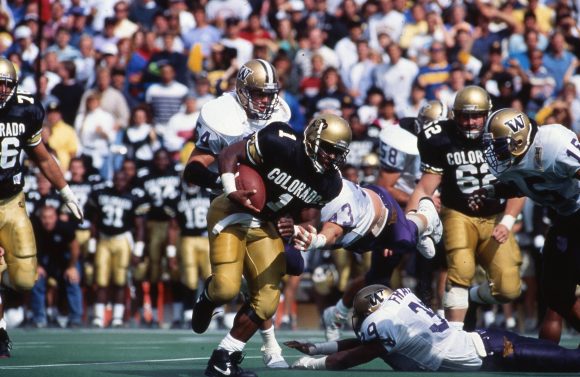 Eric Bieniemy rushes the ball during his time as the Buffs’ tailback in the early ’90s. (Image courtesy of CU Athletics)

It is hard to believe that the offensive coordinator of the most explosive scoring attack in the NFL, who has been vital in the development of some of the best offensive weapons in the league would be without a head coaching offer after four seasons in Kansas City. Yet, Chiefs’ OC and University of Colorado football legend Eric Bieniemy has found himself in that position after the most recent coaching carousel ended following the 2020-2021 season. Just a few months after I personally wrote an article on his promising candidacy, Bieniemy has seen several less qualified figures find employment leading NFL franchises. He may be a victim of the racial bias that has historically marred the league’s hiring process.

After being an All-American, Heisman finalist and National Champion as a running back with former head coach Bill McCartney’s teams at Colorado, Bieniemy spent nine seasons playing in the NFL player before starting returning to CU as a running backs coach. What followed was a two-decade journey of climbing up the coaching ladder across college and the pros. Then, after landing a spot as the running backs coach with the Chiefs in 2013, Bieniemy was promoted to OC for the 2018 season and proceeded to oversee Patrick Mahomes’ MVP season as a first-year starter in 2018. The following year, he helped lead Kansas City to their first Super Bowl victory in 50 years.

With the impressive resume he has built for himself, one would think that any team searching for a new coach would be chomping at the bit for his services. Yet, despite interviewing for six vacant head coaching positions in the league, the 50-year-old New Orleans native has been passed over at every turn.

How is it possible, in a time where offense and QB play is paramount in the league, that the OC of perhaps the league’s most explosive offense is in this spot? A common excuse has been that Bieniemy is not the primary play-caller for KC, but his role in the offense is no secret across the league. After conversations with Mahomes, Houston Texans’ QB Deshaun Watson asked Texans leadership to interview Bieniemy after learning how vital he was in developing Mahomes. The request was initially ignored by Houston and although they eventually interviewed Bieniemy, they still hired Baltimore Ravens’ assistant coach and passing game coordinator David Culley; Baltimore had the fewest passing yards in the NFL in 2020.

Overall, four of the seven head coaches hired during this coaching cycle are offensive-minded and none have the pedigree of Bieniemy, whose offenses have gone to two consecutive Super Bowls and three straight AFC championship games.

The racial element becomes rolled into all of this with how disproportionate hiring practices seem to plague the NFL. Despite making up 69% of the league’s players, there are currently only three African American head coaches employed over 32 teams (Pittsburgh’s Mike Tomlin, Miami’s Brian Flores, and the New York Jets’ Robert Saleh). With this perceived level of racial bias in play, it is hard to not see undertones behind a great candidate like Bieniemy being left out in the cold while white coaches like Culley are given jobs.

While this turn of events has been disappointing, Bieniemy has said that he will not allow himself to sink into pity over being overlooked. Also, even if the rest of the league has overlooked him, the Chiefs still understand his immense value. ESPN’s Adam Schefter reported on Sunday that Kansas City wants a long term extension with Bieniemy. Obviously, this is still an unfair consolation prize compared to leading an NFL team, and the league needs to be made to do work to improve upon its Rooney Rule to increase fairness in hiring practices.