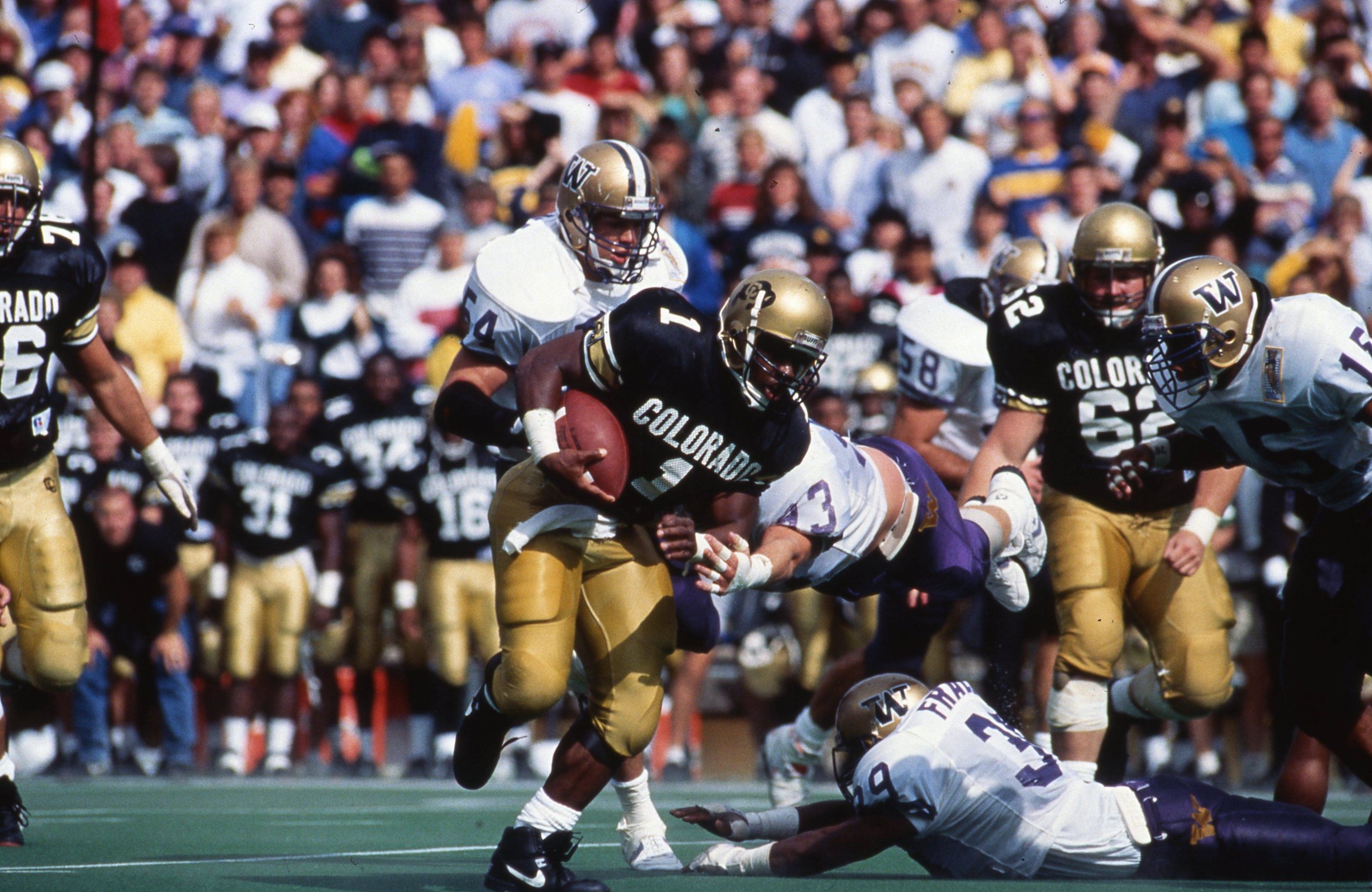 Eric Bieniemy rushes the ball during his time as the Buff’s tailback in the early ’90s. Image courtesy of CU Athletics

A legendary CU Buff may finally get his chance to take a step up to the big seat in the pros. Eric Bieniemy, the consensus all-American running back and Heisman finalist as a member of the 1990 National Championship team at Colorado, soon may be a front-running candidate for several current and potential coach openings in the NFL.

When Bieniemy began his stint as offensive coordinator for the Kansas City Chiefs in 2018, he faced the challenge of also being saddled with a first-year starter at quarterback. Luckily the starter was that year’s NFL MVP Patrick Mahomes, and the Chiefs offense has been the envy of the league ever since. With the tremendous amount of success that has been found in his tenure, including a Super Bowl win earlier this year, Bieniemy could be an excellent candidate to become the eleventh assistant in Andy Reid’s coaching tree to become a head coach.

Following the departure of former University of Colorado head coach Mel Tucker for the Michigan State job this past February, ESPN’s Adam Schefter reported that the CU athletic department contacted Bieniemy to gauge his interest in the position. Along with playing during the golden age of Buffs football under coach Bill McCartney, Bieniemy had stints as a running back coach under Gary Barnett and later as offensive coordinator under Jon Embree before taking the Chiefs running backs coach job in 2013.

The proposition of a homecoming in Boulder would perhaps be too enticing for Bieniemy to refuse, but these dreams were soon dashed. After weeks of speculation, Denver7’s Troy Renck reported that Bieniemy had removed himself from contention. With his success in Kansas City, the prospect of becoming an NFL head coach appeared imminent.

It’s possible that the 51-year-old New Orleans native should have gotten the nod to become a head coach much sooner. No African Americans were hired to fill the five vacant jobs last season, a troubling trend in a league that has been trying to create a more diverse power structure. One of those coaches, Kevin Stefanski, had even less coaching experience as an offensive coordinator than Bieniemy, yet was hired to lead the Cleveland Browns. Questions surrounding these facts became more and more pressing after Kansas City defeated San Francisco in Super Bowl LIV, meaning that Bieniemy could potentially be the number one option for a head coaching position once job interviews start up again in 2021.

If Bieniemy is somehow passed over again, it will not be for the lack of openings. Multiple coaches have been let go just six weeks into the season and several more will likely open up either during or quickly following season’s end. The Texans’ Bill O’Brien and the Falcons’ Dan Quinn have already hit the chopping block, the 0-7 Jets’ Adam Gase is considered to be all but fired at this point and Matt Patricia’s seat is hot in Detroit with the 3-3 Lions. With the tremendous amount of success Bieniemy has found in Kansas City, could we soon see the Forever Buff make the leap to lead one of these struggling franchises back to relevance?

Other notes on Eric Bieniemy: