Editorial: The only fraud is John Eastman 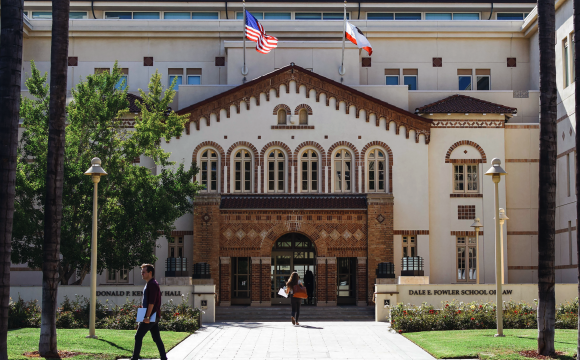 Photo from The Panther Archives

“So,” Guiliani declared, slapping his hand onto the podium. “Let’s have trial by combat.”

The rally has been tied to the insurrection on the United States Capitol that took place on the same day. Directly following Guiliani’s speech at the rally, John Eastman, a now-retired law professor at Chapman University and a visiting professor at the University of Colorado Boulder, spoke to the attendees.

“We know there was fraud — traditional fraud — that occurred,” Eastman said, providing no evidence. “We know that dead people voted.”

As Eastman spewed rhetoric about “secret folder” vote matching, students at Chapman University and CU Boulder stared at their screens in horror, watching a man who taught at both institutions directly challenge American democracy. Allegedly, he was a professor dedicated to the equitable rule of law and fair trial, but he acted against the very principles central to his scholarly work.

The editorial boards at these two universities’ student publications have collaborated to share their respective experiences surrounding Eastman’s influence on their institutions’ reputations and the similarities in administrative failure to address harmful speech.

The Panther, Chapman University — “Let’s not ‘close this chapter’”

This, all willing, would be the last editorial we as a staff will ever write about John Eastman.

Yet, as much as we’d like to simply scrub our hands clean of the last few months, there’s a problem with that. We all collectively breathed a sigh of relief when it was announced Eastman would retire and part ways with Chapman University for good Jan. 13. But many members on our editorial board are seniors. Once this semester is over, some of us could just skip across Wilson Field, diplomas in hand, and try to forget all this nonsense.

That would be it. A tumultuous time in Chapman’s history, gone from memory. A saga that dominates the headlines of our newspaper for a month at a time, then fades into oblivion. Future freshmen will step onto campus blissfully unaware until another Eastman jumps out from the shadows. Remember “The Birth of a Nation” poster debate? Remember Dayton Kingery? Remember the Patriot Front propaganda? Remember Stephanie Dellande? They all, too, slowly faded until the next scandal that made minority students feel unsafe threw open the door to reveal the skeletons in our closet.

Faculty, administrators, President Daniele Struppa — they’ve all publicly expressed their hope that we can “close this chapter” in our university’s history. Yet it feels like an entire book is being written on Chapman’s problematic instances, each chapter becoming a defining moment in our university’s legacy. Can you think of some widely circulated positive reasons we’ve been in the news for over the past few years, other than “Stranger Things” being renewed for another season?

John Eastman, one man out of thousands, does not define our university. We’re so incredibly proud of the way our faculty and student body have responded and fought against the racist, democracy-disrupting rhetoric Eastman’s propagated over the past few months. And it’s impossible to be perfect as an institution. But when these things keep happening, when there’s no end in sight to a cycle, it’s time for internal examination starting from the top down. Here’s a statement Struppa told The Panther in an interview Jan. 29:

“I bet you there is going to be another incident that is going to be a month away from now or three months away or two or next week, and it’s going to be again the bias — the confirmation that we are a racist institution,” he said.

There may well be another “incident,” and that incident might have nothing to do with the Chapman community as a whole. But shouldn’t a university that strives to create the best possible learning environment for its students be focusing on nipping the root causes for such incidents, rather than preparing for the sea of backlash that occurs when it does?

So as much as we’d like to pull an “Eternal Sunshine of the Spotless Mind” and erase Eastman from our memory completely, that’s antithetical to true progress. We as The Panther staff hope to do our part by keeping him, Kingery and The Birth of a Nation all in the back of our minds to utilize as tools in future writing to push for university policies that can help foster the change that groups like the Black Student Union and faculty advocates have worked so hard toward. We understand those reading from the CU Independent might be feeling the same kind of Eastman burnout, and we, too, challenge you to keep the memory of this time alive to galvanize your own institutional development.

Let’s not try and close the chapter. Let’s duplicate the damn book and share it with each administrator, each school department, each classroom to ensure we acknowledge, learn and grow from our history.

Eastman joined CU Boulder faculty for the 2020-2021 academic year as Scholar in Residence at the Benson Center for the Study of Western Civilization, teaching conservative thought and policy. There is nothing novel about the university bringing a conservative perspective to the campus, having previously hosted speakers such as Ann Coulter and Milo Yiannopoulos. Eastman also spoke at the 2019 Conference on World Affairs on panels including “a Big, Beautiful Wall” and landed in hot water with the CU community when he questioned Vice President Kamala Harris’ citizenship last August.

In response, over 400 students, staff and faculty signed an open letter demanding that campus leaders commit to anti-racism. Eastman sent a response to the open letter to the CU Independent, which we did not publish.

“The very nature of my position as the Visiting Scholarship in Conservative Thought and Policy is to bring some measure of ideological diversity to this institution of higher learning,” Eastman wrote.

While ideological diversity in a learning environment is important, an ideology that threatens our nation’s security and disparages our university’s reputation shouldn’t be left free of consequences.

On Jan. 7, one day after the attack on the Capitol Building, University of Colorado Boulder Chancellor Philip DiStefano addressed the incident in a letter to students, faculty and staff. In the letter, DiStefano wrote of Eastman: “His continued advocacy of conspiracy theories is repugnant, and he will bear the shame for his role in undermining confidence in the rule of law.”

However, in response to demands to dismiss Eastman, DiStefano cited the first policy outlined by the University of Colorado Board of Regents, which reads, “When university faculty speak or write as citizens … the university shall not censor their expression, initiate disciplinary action against them, or otherwise subject the faculty members to adverse employment actions because it disapproves of the substance of their expression.”

Reasons for CU’s lacking response, the Daily Camera reported, include fear among University of Colorado Regents of a costly lawsuit if Eastman were fired outright. But what’s more important — our budget or our dignity?

This policy, as DiStefano pointed out, is a reflection of the First Amendment. Indeed, as student journalists, we are avid proponents of upholding freedom of speech on college campuses, and we do not deny Eastman’s right to voice his opinions publicly, no matter how controversial they may be. However, the First Amendment does not protect incitement.

Allowing this speech from faculty sets a dangerous precedent. While Eastman did not explicitly call for violence, he riled up an angry crowd with misinformation just minutes after Guiliani suggested a “trial by combat” as a solution to their anger. The insurrectionists may have already been weaponized, but Eastman gave them extra ammo.

If we hold faculty accountable for no more than loosely defined regulations, what else can they get away with? How else will they damage the reputation of our university without consequence?

Eastman believes that CU Boulder’s administration is unconstitutionally retaliating against him, writing in a statement that “it is not too late to start acting like a great University again.” We agree, but for a different reason: CU has not retaliated hard enough.

We, as the CU Independent editorial board, hope that the incidents surrounding Eastman will compel the university’s administration to reevaluate their current procedures regarding free speech. We are not, in any way, attacking Eastman’s views or legal teachings, but instead criticizing his participation in current events regarding free speech. We hope that CU takes action to uphold itself as a respected institution.

Where to go from here

We, as students and communities that shape our universities’ futures, must be listened to by our administrations — not simply dismissed on the grounds of free speech. Taking preventative measures against inciteful speech is crucial for its elimination. We hope that our universities will reevaluate faculty manuals and explicitly list rights and regulations concerning free speech, as well as what actions will be taken when speech is detrimental to the universities’ core values.

We never want to see a figure like John Eastman step foot on our campuses again.

The Backstage Fix For Skin That Is Not Quite...

What to Wear to a Taylor Swift Concert, According...