Ann Coulter speaks out against immigration, liberals at controversial lecture 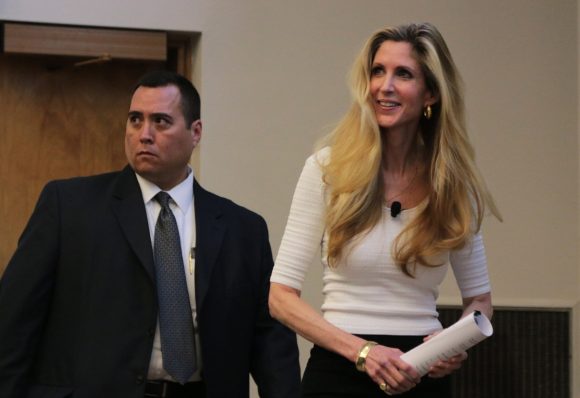 Conservative commentator Ann Coulter spoke to a packed crowd at CU Boulder’s largest lecture hall Wednesday night. In her highly-anticipated talk, Coulter asserted that immigration was the defining “litmus test,” of our time and spoke out against liberalism on campus.

The highly anticipated event drew a heavy police presence, with officers from multiple departments including Boulder PD, CUPD and the Boulder County Sheriff’s Department. Some were stationed in riot gear and military-style fatigues around the UMC fountain area and throughout the Chemistry building.

Fencing was placed around the perimeter of the UMC fountains to make sure “everyone stays safe,” according to CUPD spokesperson Scott Pribble.

The event kicked off with remarks from CU’s Turning Point USA (TPUSA) chapter president Ashley Mayer. TPUSA is the conservative activist group that brought Coulter to campus. Attendees stood for the Pledge of Allegiance before Coulter took to the stage. 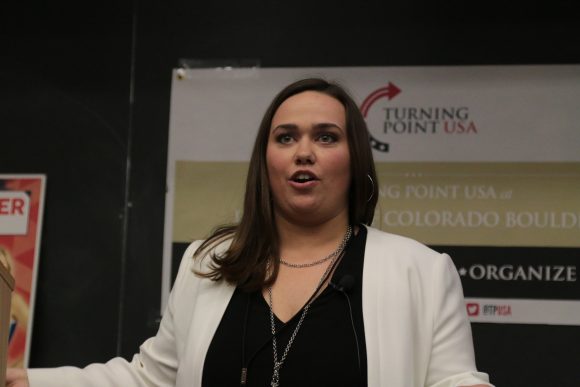 Coulter mixed commentary on the 2016 election with prescriptions for immigration policy.

“Why don’t we design [immigration policy] to get our average up?” Coulter said. “Bring in people that are smarter, better dancers, they run fast, good artists, let’s get the average up … better looking.”

Coulter is known for her hard-line stance on immigration, tonight railing against low-skilled immigration as economically damaging to the U.S. Along with her economic argument against immigration as tax-draining, Coulter feared terrorism could also be a byproduct.

In response to reconciling the divisive nature of modern politics with the desire to ‘make America great again,’ Coulter said that the core American belief is that truth emerges as a result of free speech and the competition of ideas. Responding to accusations of racism and hate speech, she redefined the words in her own terms.

“The modern definition of a racist is a conservative winning an argument with a liberal,” Coulter said, followed by applause from the audience.

A planned student walkout took place around 20 minutes into her speech and was met with chants of “USA, USA, USA,” by the remaining audience. The silent protesters met with their vocal protesting peers outside the building following their exit. Coulter announced that she could let loose “now that the adults are in the room.”

“I was kind of upset that … some of the liberal students decided to walk out in the middle, because I kind of think it’s why Republicans make fun of [liberals],” said CU student Jacob Brumbaugh. “She’s more clever than I thought, honestly.” 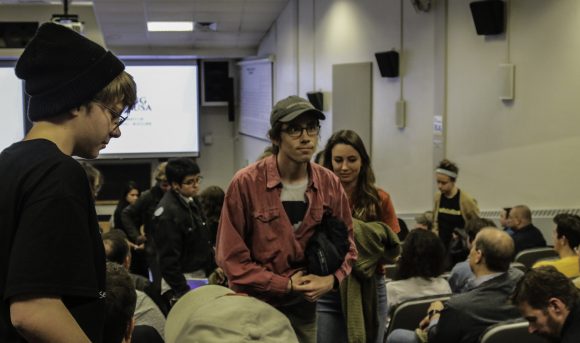 “We’re here to show our support that there’s a difference between free speech and hate speech,” said Rana Laouar, a member of CU’s Muslim Student Association who participated in the silent protests.

Coulter included several criticisms of Trump, citing his limited vocabulary and nepotism. Trump, she said, “doesn’t really know what he’s doing.” She predicted that the Trump administration will not be successful come midterm elections if Democrats take control of the House.