Soccer Buffs beat Denver on own goal in overtime 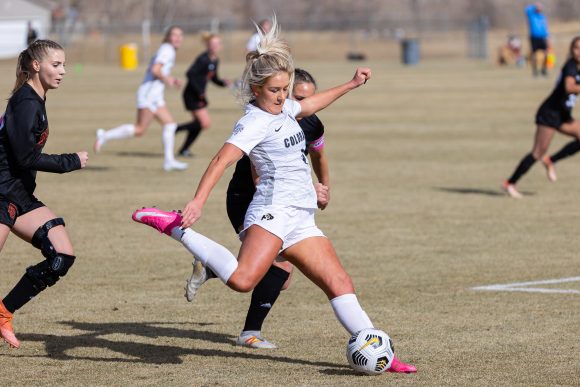 Sophomore forward Tessa Barton takes a shot on goal during the second half at Prentup Field. Feb. 6, 2021 (Nigel Amstock/CU Independent)

On a windy Saturday afternoon, the University of Colorado soccer team opened its season in front of a small crowd of friends and family at Prentup Field. It took almost 97 minutes for that crowd to have something to really cheer about, as an own goal by a University of Denver defender allowed the Buffs to sneak past the Pioneers in a hard-fought 1-0 overtime win.

Although the game-winning goal wasn’t technically scored by a CU player, it was the direct result of pressure created by a corner kick. Just following the corner from freshman midfielder Jenny Beyer, a ball kicked towards the goal by junior defender Sofia Weiner found the leg of a helpless Denver defender who deflected the ball into the goal.

The corner kick that led to the game-winning goal was just one of nine corner kicks on the day for the Buffs. Although CU didn’t score on any other corner kicks, they did have some close calls. At the 27-minute mark, a corner kick from senior transfer midfielder Shanade Hopcroft was headed by junior defender Hannah Sharts on the opposite side of the goal but a Denver defender blocked the header from going in. Sanchez spoke on the importance of corner kicks after the game.

“When you get two evenly matched teams, you can see from both teams, they usually do come down to set pieces,” Sanchez said. “We did a good job earning them…the service except for one was excellent.”

The Buffs had a few other scoring opportunities in regulation that came up just short as well. In a hopeful opportunity at the nine-minute mark, sophomore midfielder Roo Yarnell-Williams broke away on a pass, got past charging DU goalkeeper Nerea Arrazola and sent a rocket towards the net. The ball was blocked by a lone Pioneer defender who found herself at the right place at the right time.

Later in the game at the 77-minute mark, a high arching kick from sophomore midfielder Allie Palangi, who entered the game as a substitute, almost found the upper part of the goal. Arrazola made an impressive play as she hopped up with one hand and managed to deflect the ball over the top of the goal. It was Arrazola’s first Division 1 game as a goalkeeper and besides the late own goal, she performed well for Denver saving five shots.

Colorado senior goalkeeper Dani Hansen, a transfer from Washington, also performed well in her CU debut with six saves. Despite the solid outing from Hansen, Sanchez wanted to make clear that the battle for playing time at the goalkeeper position between Hansen and redshirt freshman Emma Miller and Megan Short is far from over.

Although the Buffs still got the win today, Sharts said there was much for CU to improve on.

“Obviously we created some chances today but didn’t finish them and we got fortunate on the goal so obviously scoring is something we can do better,” Sharts said. “But I think the backline was pretty solid today and everyone just fought really hard for each other.”

On the defensive side of the ball, Sharts helped contribute to Denver’s scoreless afternoon, noting that defense will be a focal point this season.

“They say defense wins championships for a reason so we’re going to pride ourselves on that for sure and do our job on the defensive end,” she said.

CU will look to build on their strong defensive performance on Saturday at noon as they play host to Northern Colorado. The two teams met in the first round of the NCAA tournament last year, a game in which the Buffs won, 6-0.