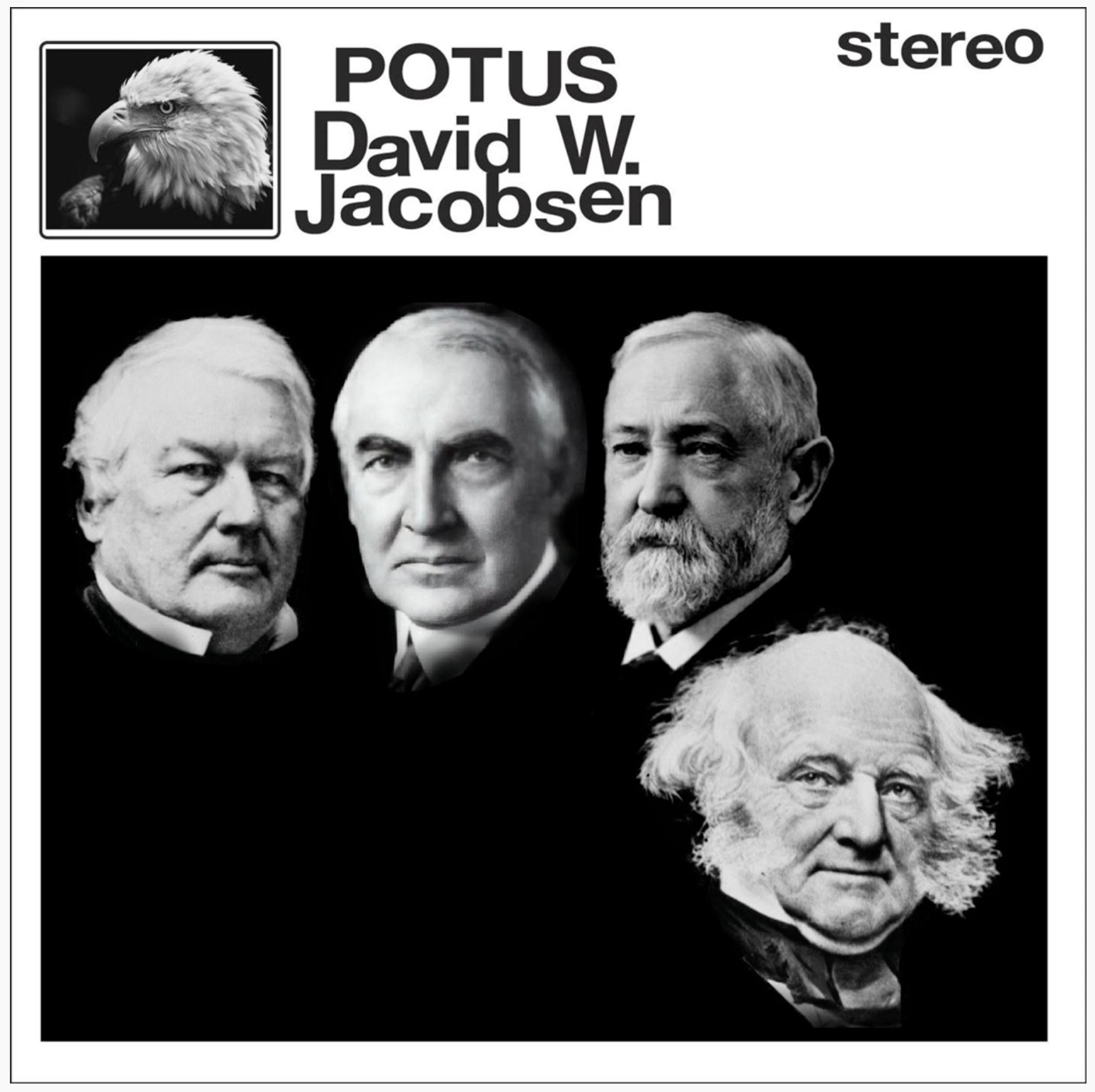 The tumultuous politics of the Trump era—vitriolic debates, Twitter meltdowns and two impeachments to boot—have been subject to countless parodies. Rather than add to that pile, indie-singer songwriter David W. Jacobsen instead looks to the past, finding plenty of humor and horror in executive leaders from our nation’s past. On “POTUS,” titled after the acronym for the executive office, Jacobsen dives into the lesser-known presidents, avoiding the predictable roasts of Nixon or Trump to poke fun at the Garfields or Hoovers of the world.

Jacobsen, a graduate of Berklee College of Music, has written dozens of albums since 1995, a range of work that includes both humorous and serious reflections on mundane, everyday situations set to mainly acoustic instrumentation.

Increasing his scope both musically and conceptually, Jacobsen turned to his love of history for his next album. The “POTUS” project began as the one-off parody “Purple Hayes,” a novelty song about Rutherford B. Hayes set to the tune of Jimi Hendrix. Jacobsen saw potential in this model of storytelling, which led to dozens more songs over the next five years.

A key ingredient to the appeal of the “POTUS” tracklist is the fact that Jacobsen intentionally wrote each song from the perspective of the disgraced president during their tenure, rather than a historical third-person view. This allows the project to delve into the perspectives of these figures — whether they were deserving of empathy or not.

“Swing Around the Circle” is a boisterous tune from the perspective of Andrew Johnson, a Southern Democrat who shamelessly supported the Black Codes, a series of laws that stripped many African-Americans of human rights even after the Civil War. “Swing around the circle / You can take your shots at me /Swing around the circle / I care not for my dignity,” he sings as Johnson, well aware that he was an unworthy replacement to Abraham Lincoln.

“He was monstrously racist in a time when most white people were pretty racist to begin with,” said Jacobsen. Still, Jacobsen found virtue in telling these tales, making sure to use comedy not to glorify but to shed light on the ineffaceable and brutal history of the United States.

“He was a horrifying human being, but he still had a perspective,” Jacobsen said. “It might not one that I share, but it’s still a perspective.”

Jacobsen mixes the folksy, off-kilter comedy of Weird Al Yankovic with the bombastic theatricality of Lin-Manuel Miranda’s “Hamilton” to survey these disreputable leaders, creating an eclectic and educational album. Though the grandiose scope and tone of the project look “sort of like musical theater,” as Jacobsen puts it, the charm of “POTUS” instead comes from the fact that each of its 11 tracks carries its own self-contained identity. Working instead as an intimate collection of songs, each one provides a bite-sized study of the character, with the instrumentation perfectly matching. Intentionally avoiding cohesiveness, “POTUS” shines through the bold variance of Jacobsen’s instrumentation and lyricism.

“I went with whatever melodic idea I was musing on at the time,” Jacobsen said, alluding to the free-wheeling spirit behind his work.

The track “Samuel Tilden’s Lament” is about the loser of the 1876 election, the only candidate in history to win over 50% of the popular vote but ultimately lose due to electoral college shenanigans. It employs heavier guitars to give an aggressive, pun-like ambiance to a track written from the cartoonishly angsty perspective of Tilden himself, as he whines “Been robbed by circumstance and by time / I’m acting bitter, we all know why / Rutherford Hayes’ job should be mine.”

Meanwhile, Jacobsen sings in the delivery of an old mariner on “Shanties,” a decision he made as a play-on-words, due to the number of shantytowns, or “Hoovervilles” built during the tenure of President Herbert Hoover during the onset of the Great Depression. “I fed countries through the Great War /Did what I could to ease tragedy /Still you name your shanties after me,” he sings in Hoover’s perspective, poking fun at the fact that an unflattering nickname for slums was his lasting legacy. While Jacobsen frames these presidents as down-on-their-luck protagonists of their songs, the comedic aspect makes it all the more fun to deride them as pitiful villains — similar to appreciating the catchy pop melodies of the King George character in “Hamilton,” while booing and jeering the missteps of the real-life counterpart.

Alongside tales from the past, Jacobsen unintentionally saw disturbing tie-ins to the everyday news cycle as he completed work on “POTUS” during the Trump administration. For example, “Never Asked” is the tale of Chester Arthur, “a fat New Yorker with no business being President.” In the song, Jacobsen explores the corruption and ineffectiveness of a one-term president, who never attained any lofty achievements in the office he never asked for.

The only difference between Arthur and Trump?

“Arthur couldn’t make an ass of himself on Twitter,” Jacobsen said, laughing.

Despite the heavy-handed reflections from the past and the connections to contemporary politics, Jacobsen insists that “POTUS” is merely a musical passion project, one meant for history buffs to enjoy before Jacobsen moves onto the next weird footnote in history that picks his brain.

“I don’t want to conflate (POTUS) as political commentary,” he said. “It’s more of a comment on history, and everyone can take away from it what they will.”

David W. Jacobsen’s work can be found here, and “POTUS” can be streamed here.