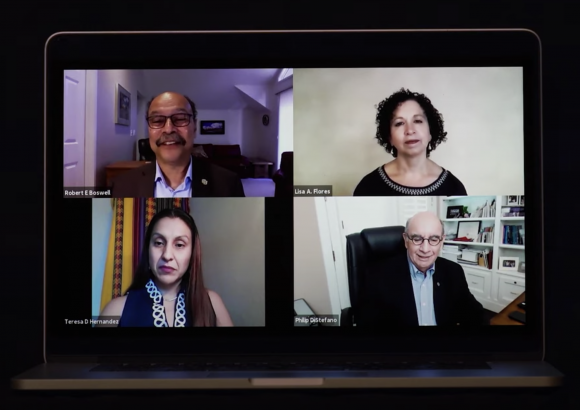 On Wednesday, University of Colorado Boulder Chancellor Philip DiStefano hosted the first of his “State of the Campus” video panels. The video featured co-chairs of the University of Colorado Boulder IDEA (Inclusion, Diversity and Excellence in Academics) council Teresa Hernandez and Lisa Flores along with Vice Chancellor for Diversity, Equity, and Community Engagement Robert Boswell.

The IDEA council is a body of community members and faculty who advise university leadership on issues surrounding diversity, equity and inclusion. Originally formed in 2015, the current leadership sees proper communication between students and the heads of campus as a primary goal.

Hernandez and Flores say that this year should focus on bringing on new students, staff and faculty to work on combating systemic racism. They also want to make sure those who are still working right now stay focused.

Boswell said that he believes retaining people who care about these issues is the most important part of combating racism. However, he says that it won’t be easy.

“That requires a change in the campus culture so that we can support people,” Boswell said.

Flores added that she thinks the council should first be listening to community members on where the most hurt is within the university.

If they do that, “we can bring some change pretty quickly, at least in pocketed areas,” Flores said.

Despite this hope, the panelists made a point to mention that this change would not come too quickly.

DiStefano said he’s heard community complaints that the university is not moving fast enough to embrace equity and make lasting changes to the environment on campus.

“I’m sure you hear, from our students, from our faculty, from the staff, as you know, we’re not making progress as quickly as we should be,” DiStefano said to the rest of the panel.

However, Hernandez warned that quick progress shouldn’t be their priority.

“We’re not sure that moving forward rapidly is the best approach,” Hernandez said. “We don’t want this to be a Band-Aid.”

Student activist groups have been putting continuous pressure on the university to change deeply ingrained systemic racist qualities about the institution. This stance might cause some alarm among groups who have been disappointed by recent actions taken by CU Boulder, laying the foundations for a divide between student activists and campus leaders.

Most recently, the university expressed its reluctance to dismiss conservative professor John Eastman after he appeared hours before the Capitol riot in Washington D.C. A petition that gathered hundreds of student signatures expressly requested that CU Boulder do otherwise.

DiStefano said that the university is starting to begin looking for someone who can take a leadership position on diversity, equity and inclusion.

Right now, DiStefano said he wants to turn his attention to the campus.

“I think it’s so important for me and for our leadership team to continue to listen to the voices from our community,” DiStefano said.