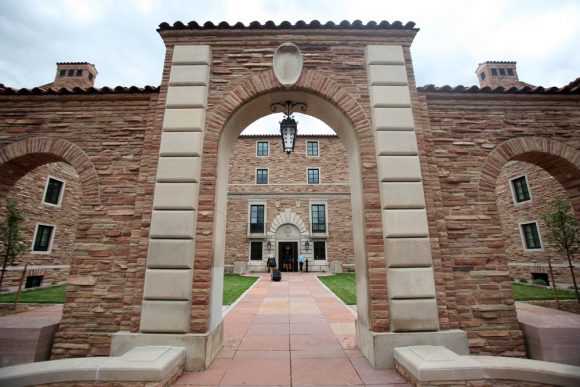 Students walk into the north side of Baker Hall (Kai Casey/CU Independent).

The United Campus Workers (UCW) Colorado, a union of university workers in the University of Colorado system, conducted a survey in Oct. 2020 asking resident assistants (RAs) to rate their satisfaction with safety levels at the dorm halls. The results? Eighty-nine percent of CU RAs say that they do not feel safe at work.

The results were posted on Oct. 30, 2020, a time when COVID-19 cases in Colorado were rising. The state’s positivity rate sat at 13.08% and since the survey’s conclusion, Colorado has recorded a total of 385,000 cases according to state data.

Current state data puts the positivity rate at 5.41%, per the Colorado Department of Public Health and Environment’s COVID-19 data visualizer.

UCW Colorado argues that University of Colorado Boulder RAs should receive hazard pay for working in university dormitories, which have proven to become hotspots for COVID transmission. CU Boulder led the state in total reported COVID-19 cases, at one point tallying twice the total cases of Colorado State University.

Since Jan. 4 of this year, the university has only reported 137 positive cases, though this number is likely skewed low due to the absence of students on campus during the break period.

RAs at CU Boulder are not permitted to speak to “the media,” but with issues such as their safety on the line, some felt it was time to break their silence.

“I feel completely unsafe working as an RA,” one told the CU Independent in an email. The RAs interviewed for this story wished to remain anonymous.

“The higher-ups within the university hold all the blame,” they continued. “The university has years’ worth of incident reports written by RAs that prove how often and to what degree freshman break policy.”

Writing an incident report is the first line of defense an RA has when they notice policy violations, but sometimes a hall director or even CUPD must be contacted to ensure that the student or students in question are held responsible.

“These incident reports had no real consequences for not wearing masks, partying, gathering, etc,” said the RA.

“Many of my residents had COVID-19 and told me about it,” they said. “But I was not informed by the university.”

Adding insult to injury, masks and hand sanitizer were in short supply, and for close to a month RAs had no access to disinfectant wipes.

“The university is selfishly keeping students in dorms to get more money,” a second RA said.

In their eyes, the university is responsible for what was the biggest outbreak in the state. The fact was not lost on Boulder County Public Health, as they issued a series of controversial orders that limited the movement of 18-22-year-olds in an attempt to stall the spread of COVID-19.

In the past, workers’ unions have fought for workers’ rights, equal pay, and appropriate pay, among other things. Today unions do much of the same but are often viewed negatively. In 2019, the Guardian reported that union membership was at its lowest in over a century.

Some businesses advise their employees to avoid joining a union and The Home Depot is outright hostile towards them. The right to join a union has been federally protected since 1935, however, when the National Labor Relations Act was passed into law.

Madeline Pettine is a student researcher at the Laboratory for Atmospheric and Space Physics and a member of UCW Colorado. She has been working with the RAs as much as she can, attempting to get them the hazard pay they, and she, feel they deserve.

“We wanted to figure out what the most urgent issues RAs are facing right now so that we knew what to focus on,” Pettine said.

“That’s especially insidious for RAs since their housing is dependent on keeping their job,” Pettine explained.

In addition, RAs lead busy schedules. They are expected to work up to 20 hours per week or more depending on their on-call hours and be full-time students with at least two semesters of college education already completed. According to Pettine, “RAs have very little free time due to the demands of their job.”

UCW Colorado hopes that the results of their survey will encourage the university to extend some hazard pay to RAs who have been in harm’s way.