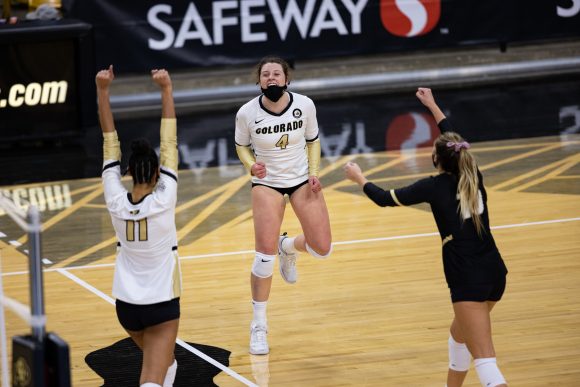 The Buffs celebrate a kill during the third game vs Oregon State at the CU Events Center. Jan. 22, 2021 (Nigel Amstock/CU Independent)

The Colorado Buffaloes volleyball team trampled over the Oregon State Beavers in a 3-0 sweep in their season opener Friday at the CU Events Center. In their first match in over a year, the Buffs looked strong throughout the night, hoisting them to an early 1-0 record on the season.

In CU’s first match during the pandemic, players’ calls for the ball echoed throughout the empty stadium. Both teams had to wear masks and the ball was meticulously sterilized after each play. Although there were no fans at the CU Events Center, the Buffaloes bench had electrifying energy throughout the game, yelling their own cheers to their teammates and dancing to the music.

The game showcased multiple Buffs who proved that a year off doesn’t make them any less talented. Sophomore outside hitter Jill Schneggenburger looked strong early with four kills after the first set. Same for graduate middle blocker Rachael Fara who had ended the night with a strong .583 hitting percentage. Sophomore outside hitter Elissa Alcantara led the team with 10 kills and tied Fara with 11 points. 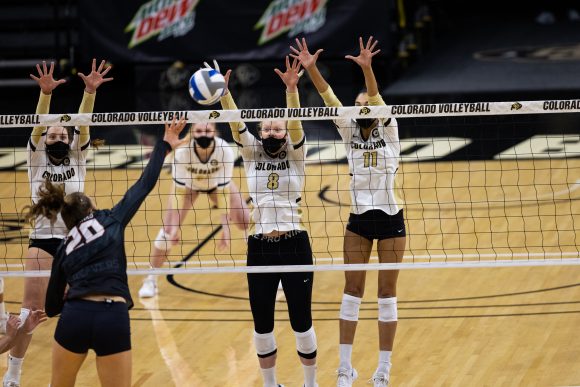 Colorado was looking good from the start. Winning the first set by a score of 25-16, the excitement amongst the team was detectable. The Beavers were struggling to keep the ball inbounds throughout the game, specifically throughout the first and third sets.

Junior setter Jenna Ewert was taking a noticeable lead role on the team, energizing her team at any opportunity. She finished with 25 assists, as well as a team-leading 5 blocks.

“Jenna did a really good job trying to bring up the team when we were in a rut or anything,” Alcantra said. “I think she made us all energetic.”

The Beavers came back with multiple strong kills in the second set, and some miscommunication by the Buffs gifted them a few extra points. Clearly disappointed in their last few plays, the Buffs fought their way back to tie OSU at 16.

After a hard-fought and close set, the Buffs came out on top by a final score of 25-23, giving them a 2-0 lead heading into the third set. CU battled their way back to a set victory after being down the majority of the set.

One of the biggest stories of the night was that of junior libero Brynna DeLuzio. After missing the majority of 2019 facing medical issues, this was her first game back on the court in almost two years, and she did not disappoint. With a team-high 17 digs, DeLuzio looked like she hadn’t missed a day.

“It was very heartwarming to see her back on the court, she’s been through a lot,” Ewert said. “We shared setting time my freshman year so I never got to play on the court at the same time as her until this season, and every time I’m on the court with her I understand what people talk about when they say she has a presence. She’s a leader.” 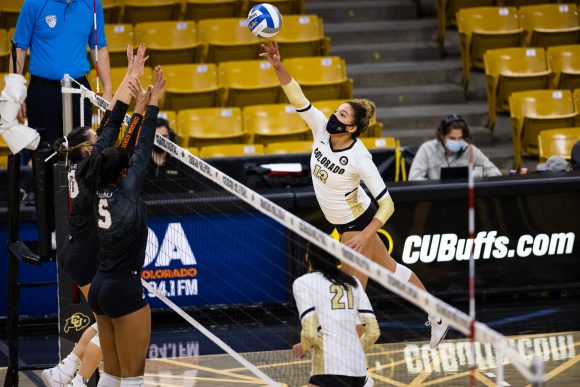 Following a convincing third set, the Colorado Buffaloes proved victorious by a final score of 3-0. Although an occasional miscue, it is clear that the CU volleyball team has been ready to play and working hard to be at the top of their game. Even when down in score, the entire team was always up in spirits.

“It’s great for both teams and a testament to what everyone is doing to get us out on the floor and have everyone healthy and ready to go,” said head coach Jesse Mahoney. “We haven’t played anyone else in a long time, so I think both teams were a little rusty. As the match went on it was really good to get some competitive fire going.”

The Buffs remain in Boulder for a rematch against OSU on Sunday at 11 a.m. MST.