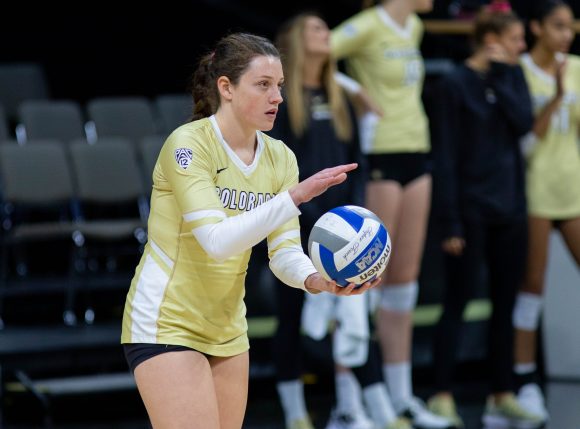 Sophomore setter Jenna Ewert gets ready to set the ball to start off the game against the Washington Huskies. Oct. 27, 2019 (Casey Paul/CU Independent)

On Friday, the Colorado Buffaloes volleyball team will hit the court against Oregon State for the first time in over a year. Due to the COVID-19 pandemic, the team was stripped of a typical fall season and haven’t competed since Nov. 30, 2019.

Head coach Jesse Mahoney is looking for a comeback season after falling to near the bottom of the Pac-12 last season. Finishing with a 13-17 overall and 5-15 Pac-12 record last season, CU was selected to finish eighth in the Pac-12’s Preseason Coaches Poll.

Mahoney will need to replace lost production after losing Justine Spann, who was the team’s leader in kills and aces, as well as Rachel Whipple, team leader in digs. Mahoney is looking for a few players to step up into their roles.

A few promising junior’s include middle blocker Meegan Hart and setter Jenna Ewert. Hart led the team in blocks and Ewert led the team in assists during their sophomore years and are expected standouts for this season. Another rising star is sophomore right side/middle blocker Sterling Parker, who was second on the team behind Spann in kills. Not to be forgotten is senior outside hitter Leah Clayton who transferred from East Tennessee State University in 2019 but redshirted last season.

Although CU lost a pair of talented seniors, they have also gained a strong freshman class. Between outside hitter Maya Tabron and defensive specialist/libero Morgan Riddle, the Buffs should be able to bounce back successfully.

The Buffs saw some offseason action off the court by signing two of the top-100 prospects from the Class of 2021, both of whom were Under Armour All-Americans.

Jahara Campbell, from Chandler, Arizona, is ranked a top-10 outside hitter in the country and could compliment Ewert at the outside hitter position. The other, Taylor Simpson from Calabasas, California, is one of the top setters nationwide. Campbell and Simpson should make a significant impact next season.

Colorado and Oregon State will meet on Friday at 7 p.m. and Sunday at noon MST at the CU Events Center.

Logan is a freshman sports journalist for the CU Independent. She is majoring in Journalism while minoring in Sports Media. You can follow her on instagram at @loganstandard or on twitter @loganalexa02.