Battey, blocks and a balanced offense lead Buffs over Cardinal 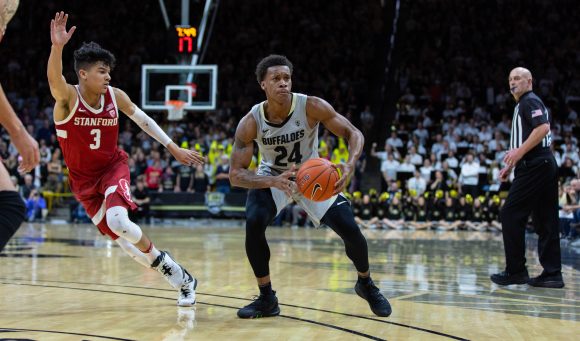 Sophomore guard Eli Parquet gets ready to pass the ball to an open teammate during the second half of the game against the Stanford Cardinal. Feb. 8, 2020 (Casey Paul / CU Independent)

Following a convincing 77-64 win over the Stanford Cardinal on Saturday, Colorado Buffaloes’ senior guard McKinley Wright IV made his opinion known walking off the court of the empty CU Events Center: “Put some respect on our name,” he said.

Colorado is now 11-3 overall and 5-2 in Pac-12 play but have yet to crack the AP Top-25. With their fourth consecutive win on Saturday, Wright’s Buffaloes further cemented themselves as one of the top teams in conference.

Despite the lopsided final score, it was anybody’s game throughout most of the first half. Both Colorado and Stanford struggled shooting the ball early and CU held a slim 9-8 lead eight minutes in. Just one of the game’s first 11 three-point shots fell, courtesy of Buffs’ senior guard Maddox Daniels.

Strong defense often produces strong offense and it did on Saturday for CU. Freshman forward Jabari Walker blocked a Stanford layup and Daniels nailed a transition three in part of a 10-3 CU run. Stanford turned the ball over four times in the final six minutes of the half and CU led 40-26 at the break.

Junior forward Evan Battey had the tough assignment of guarding Stanford forward Oscar da Silva. Although Battey challenged da Silva to tie his season-low 50% from the field, he led the Cardinal attack with 22 points. “I thought Evan Battey battled him (da Silva) tonight and made him work for everything,” head coach Tad Boyle said.

Da Silva’s brother in black and gold, CU freshman forward Tristan da Silva, responded nicely to the challenge of facing his older sibling. He tallied a career-high five points including an emphatic buzzer-beating corner three to end the first half.

Despite the exciting end to the half, Colorado was slow to begin the second half. Stanford put together a quick 6-0 run early before Boyle called a frustration timeout. Battey made a nice cut to the rim on CU’s ensuing possession and the Buffs were back on track.

Senior guard Wright, fresh off breaking the school record for career assists on Thursday, commanded one of CU’s most balanced offensive attacks of the season. Nine Buffaloes scored on the afternoon with four scoring in the double-digits.

“We’re getting contributions from everybody and it’s different guys each night and that’s what makes this team again so hard to prepare for, and I think we have a lot of weapons,” Boyle said. “I want our guys playing with confidence and take the shots when they’re there.”

Wright led CU with 14 points while Battey recorded his second double-double with 13 points and a season-high 12 rebounds.

“Rebounding is a thing I try to do my best on every night and I know my team needs me to get rebounds,” Battey said. “I’m not so focused on the offensive side but defense and rebounding is what our program is built on and just instilling that into all of our brains is a big focus for us.”

The block party continued in the second half when Walker and junior guard Eli Parquet blocked back-to-back Stanford shots to end two possessions. Even without seven-footer senior forward Dallas Walton for a sixth consecutive game, the Buffs recorded five blocked shots, their most in a Pac-12 game this season.

“Those guys did a great job of protecting the rim and that is a huge thing for us,” Battey said.

Along with the momentum-changing blocks, CU’s defense held Stanford to 34% from the field and allowed just 1-of-10 three pointers in the second half.

“We made some adjustments in terms of how we tried to guard them and I thought our guys did a really good job of taking that game plan and executing it,” Boyle said. “We weren’t perfect but defensively we got stops when we had to.”

With eight minutes remaining and up 12, CU worked an 8-0 run to tighten the bow on its fourth consecutive win.

Grad-transfer senior forward Jeriah Horne has quickly become one of the team’s most reliant threats. He recorded his eighth double-digit scoring game and grabbed four rebounds and four assists. Wright may set the tone in terms of veteran leadership but Horne is close behind.

“Our main focus has just been about focusing on playing together and as a team,” Horne said. “When McKinley (Wright IV) came out, he said the one thing he loves about this team is how no one cares about their own stats and we’re just focused on winning. That sums it up completely.”

Colorado hits the road next to face the 1-11 Washington Huskies on Wednesday at 7 p.m. MST.