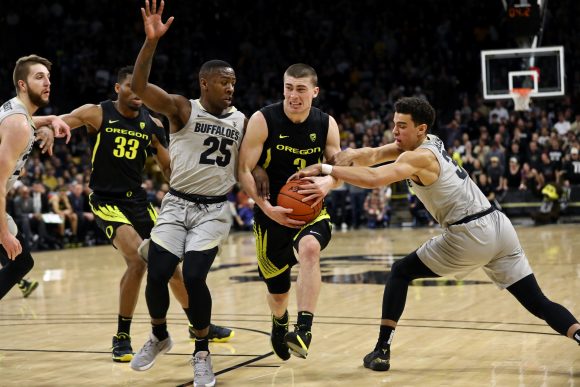 Coming off a 1-2 road trip, the Colorado Buffaloes will be back home on Thursday to face the No. 17 Oregon Ducks at 3 p.m. MST on FS1.

Colorado is 7-3 (1-2 Pac-12) this season and owns a perfect 9-0 record at home against Oregon since the pair first met in 1955. Thursday’s matchup, however, may prove to be Colorado’s toughest test in conference this season. Senior guard McKinley Wright IV and the Buffaloes are determined to extend the home winning streak against Oregon to double digits.

Wright has led the charge for Colorado averaging 15.5 points, 4.5 rebounds and 5.2 assists per game, while shooting an impressive 56% from the field. He recently scored his 1,500 point on Dec. 31 against USC and needs just nine assists to tie the school record. Former Buffaloes’ guard Jay Humphries currently leads the list with 562 assists.

“It’s a blessing,” said Wright when asked what it feels like to be closing in on the record. “When I first committed to this school I didn’t think I’d be in this position. Just credit to God, my teammates and my coaching staff for putting me in a position to make plays for my teammates.”

One of those teammates is senior graduate transfer Jeriah Horne who may be asked to step into the starting lineup once again with the status of senior center Dallas Walton up in the air for Thursday’s game. Horne has been a consistent presence on the glass for the Buffs and posted double-digit scoring outings in the past two games against UCLA and USC.

Head coach Tad Boyle said he expects a healthy and complete team outside of Walton’s injury. Though Boyle said Walton likely could’ve played against UCLA on Jan. 2, his injury history has led Boyle to be more cautious.

Meanwhile, the Ducks are a top-20 team in the country with two of the top five scorers in the Pac-12; senior forward Eugene Omoruyi has averaged 18.7 points per game and senior guard Chris Duarte is close behind at 16.7 points per contest.

In light of the recent announcement that Saturday’s game against Oregon State will be postponed due to COVID-19 issues within the Beavers’ program. Boyle expects his team to “empty the tank” on Thursday night.

The environment at the CU Events Center will be a little different this year as there won’t be fans or family in the stands. Despite playing in an empty stadium, Colorado is 2-0 at home this season with wins against Northern Colorado and Omaha.