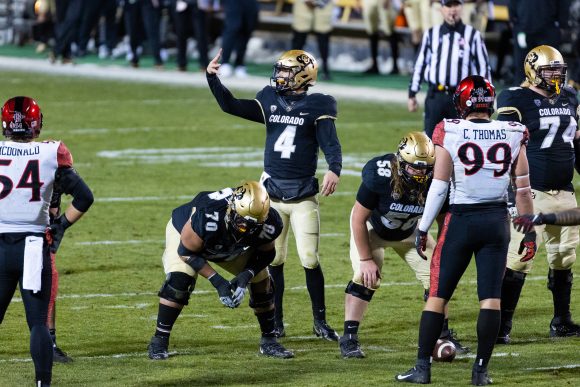 For the first time since the 2018 season, the CU Buffs are ranked in the Associated Press Top 25 Division I college football rankings. Following a win against the University of Arizona in Tucson Saturday night, which featured sophomore running back Jarek Broussard running for 301 yards and staunch defensive play, the Buffs enter the final week of the modified 2020 regular season ranked No. 21 nationally. The undefeated Buffs (4-0) trail only the No. 16 USC Trojans (4-0) among ranked Pac-12 teams.

The last time CU ranked in the AP Top 25, the Buffs got off to a 5-0 start that ended miserably, with seven consecutive losses to end the season. This led to the firing of head coach Mike MacIntyre. Prior to 2018, the Buffs broke into the Top 25 during its 2016 Pac-12 South championship season; remember #RiseisReal? The 2016 season, however, ended on a sour note with a blowout Pac-12 championship game loss to the University of Washington and a 38-8 loss against Oklahoma State in the Alamo Bowl.

The Buffs, who were given the third-longest odds to win the Pac-12 ahead of the season, have not only solidified their bowl game eligibility but remain in tight contention with USC to represent the Pac-12 South in the conference championship game. Perhaps the most impressive part of CU’s success is that head coach Karl Dorrell took over the CU football program just 10 months ago. Dorrell wasn’t able to hold actual practices with his players, including first-year starter and senior quarterback Sam Noyer, until mid-Oct.

“It’s good that we’re getting some recognition but we still have a ways to go. We have a great game in front of us with Utah, first day of preparation was put in today,” Dorrell said. “It’s a short week. We’ll get our team ready to play. We know what’s in front of us. We have to make sure we’re doing the things that are necessary for us to win this Friday night. That’s all I have to say for that.”

Colorado will seek to extend its unexpected success in the final game of the regular season against Utah on Friday. COVID-19 pending, a Buffs win and a USC loss to UCLA could place CU back in the Pac-12 championship game.

CU’s annual “Rumble in the Rockies” conference rivalry showdown with the University of Utah is slated for Friday night at 7:30 p.m. MST in a nationally televised broadcast on FS1.