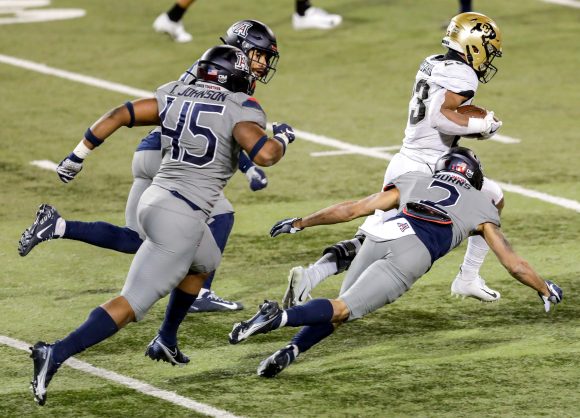 It certainly wasn’t a performance that would win any beauty contests, but nevertheless, the CU Buffs football team walked out of Arizona Stadium in Tucson Saturday night without a blight on its record. Colorado improved to 4-0 overall (3-0 Pac-12) with a 24-13 road victory over the Arizona Wildcats.

Despite coming into Tucson an 8.5-point favorite, the Buffs started off the night on the wrong foot. The first quarter consisted of surrendering 13 unanswered points prompted by long Arizona runs and defensive miscues. Things were looking bleak for the Buffs. But then came sophomore running back Jarek Broussard.

The Dallas, Texas native had himself a historic day that ranked amongst the best in CU history. With 301 rushing yards, Broussard put up the fourth-most in school history in an impressive performance. He has now racked up 733 yards over the first four games of the season, eclipsing former CU RB Rashaan Salaam’s mark through the same number of games that began his 1994 Heisman campaign. Saturday had also marked four years since Salaam’s passing in 2016.

“Every day we walk in the Champions Center and walk past that (Heisman) trophy,” Broussard said. “It means a lot to be in that kind of company with that sort of player.”

While Broussard showed out at the tailback spot, senior quarterback Sam Noyer had a less than stellar showing in the desert. He ended the evening with just 92 yards on 12-of-19 passing attempts while turning the ball over twice on interceptions. Noyer’s second interception, which came in the fourth quarter, ignited a seemingly heated exchange between him and head coach Karl Dorrell. After the game, Dorrell said the conversation was a product of the competitive nature between the two.

Despite falling down 13-0 early in the second quarter, CU’s defense came to play once the offense arrived on the scene. A pair of touchdowns from freshman running back Ashaad Clayton would give the Buffs’ a 14-13 lead heading into the half. Colorado held Arizona scoreless in the second half and gave up just one touchdown on the night while sacking Arizona QB Will Plummer five times.

“Everybody was playing hard no matter what the score was, first half and second half,” said junior outside linebacker Carson Wells, who had 11 tackles and 1.5 sacks on the night. “Once we got the lead, we just kept playing hard for each other.”

Colorado swallowed a difficult pill when junior offensive lineman Chance Lytle went down with a serious leg injury on a Noyer two-yard touchdown run in the third quarter. Nearly every player from both sidelines came on the field in solidarity as Lytle exited the field on a cart. Wells understood how big the blow this was to CU’s offensive line going forward. “He gets the offensive line going. You can’t replace him,” Wells said.

The Buffs were already without junior center Colby Pursell (injury) and senior left guard Kary Kutsch (COVID-19 protocols) and Dorrell said that he expects Lytle to miss a significant amount of time with his injury. Dorrell’s O-line was up to the challenge and gave up just one sack helped yield the success of Broussard.

With the win, the Buffs defeated the Wildcats for the first time since 2016 and extended Arizona’s losing streak to 11 games dating back to last year. Colorado also kept its Pac-12 title hopes alive by pulling even with USC in the South division with a 3-0 conference record. However, CU is still technically behind because of tie-breakers. The Buffs will return home next week to face the Utah Utes on Friday at 7:30 p.m. MST.