The second decade of the Tad Boyle era tipped off Wednesday night at Bramlage Coliseum in Manhattan, Kansas. The Colorado Buffaloes men’s basketball team faced South Dakota in their first of two non-conference matchups as part of The Little Apple Classic. Boyle and the Buffaloes earned a 84-61 victory over the Coyotes.

The 11-year head coach mentioned prior to the trip to Manhattan that just being able to play a basketball game would be a significant step in the right direction. However, for the Buffaloes’ returning players from a season ago, the 2020-21 campaign presented an opportunity to put the premature ending to last year behind them.

Senior guard McKinley Wright IV talked about the end the last season and the impact of the pandemic on the team’s game mindset.

“It’s been such a long wait,” Wright IV said. “We’re thankful that we’re in this position to play. And like I said before, it’s why we have to play every game like it’s our last because we truly don’t know how many games we’re going to get. We’re hoping it’s 27 and (we’ll) get a March Madness tournament at the end, but we don’t know.”

The senior guard from North Robbinsdale, Minnesota provided an offensive punch early for the Buffs, sinking four of his first five field goals. Wright IV and freshman forward Jabari Walker combined for 15 of Colorado’s 20 points through less than nine minutes of game action. Colorado led 22-13 at the 10:45 mark of the first half. Wright IV spoke highly of freshman class following the victory. 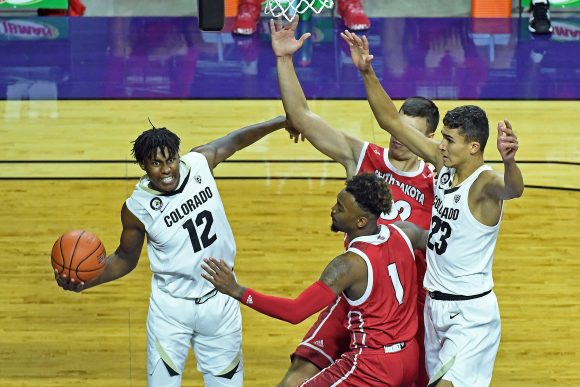 “I love playing with all of them,” Wright IV said. “They look forward to learning. They look up to me and I just want to do my job and help them anyway I can. As you guys (saw) tonight, our young guys can go and some of them produced for us really well tonight.”

The pandemic had an immediate impact on Colorado’s lineup in game one. Senior forward D’Shawn Schwartz did not play for the Buffaloes against South Dakota due to a possible COVID-19 exposure. Boyle talked postgame about the situation surrounding his senior forward.

“We just wanted to be very, very safe with him and not put anybody else at risk,” Boyle said. “Hopefully he’ll be back in uniform on Friday, we’ll see. We’ll know more tomorrow and Friday about that situation. Boyle added that Schwartz flew back to Boulder on Wednesday, leaving his status for Friday’s matchup with Kansas State up in the air.

Not surprisingly, however, Wright IV more than made up for Schwartz’s absence. The Naismith and Bob Cousy Award watch list member finished through contact over redshirt sophomore guard Kanon Koster, and nailed a three to extend the Colorado lead to 14 with just over six minutes left in the half.

Questions surrounding how the Buffaloes’ freshman class would fit into the rotation were answered early. Walker and freshman forward Tristan da Silva saw early action for Colorado in addition to redshirt freshman guard Keeshawn Barthelemy. The Toronto, Ontario native played both alongside Wright IV and in relief of him, recording 11 points and seven rebounds in his college debut.

Wright IV commented on what it’s like playing alongside Barthelemy, another playmaker at the guard position.

“Having him as another weapon, another really good point guard who can see the whole floor, can really pass and who can create a shot for himself, that’s huge for us,” Wright IV said. “That’s something we need. I’m excited for him. He’s just getting started, I promise you.”

Colorado led 45-31 at the break, Wright IV leading all scorers with 16 points. Senior guard Stanley Umude carried the scoring load for the Coyotes, sinking seven of his 14 first half points from the free throw line. South Dakota utilized the charity stripe to chip away at the Buffaloes lead, ending the first 20 minutes on a 6-0 run.

Boyle spoke highly of his team from an offensive standpoint, but pointed out that the free throw discrepancy, a product of too many fouls, will be something to improve on against Kansas State.

“We had 20 assists on offense,” Boyle said. “Anytime we have 20 assists it’s a good night for the Buffs offensively. We fouled too much. One of the stats that we have, that we hang our hat on, is we want to make more free throws than our opponent attempts and South Dakota did that to us tonight.”

South Dakota senior guard Ty Chisom scored the first five points for the Coyotes to open the second half. The Buffaloes shared the wealth in the early part of the second half with buckets from Parquet, Wright IV and senior guard Maddox Daniels. Colorado maintained a 19-point advantage at the under-16 timeout, having recorded just a pair of turnovers in over 24 minutes of action.

Walker picked up where he left off in the second half completing an and-one at the 14:38 mark. The freshman from Los Angeles, California recorded double-figure scoring numbers in his collegiate debut, finishing with 10 points and six boards.

Graduate transfer forward Jeriah Horne fueled a 9-0 for the Buffaloes with just under nine minutes to play. The senior from Overland Park, Kansas knocked down three triples in a row for Colorado. Senior forward Dallas Walton spoke about Horne’s impact Wednesday night and what he brings to the table.

“He’s one of those veterans on the team,” Walton said. “He’s an older guy, so a lot of younger guys look up to him. We all know what he’s capable of, and he had a great game for us today. I think he’s going to be a big piece for us this year.” 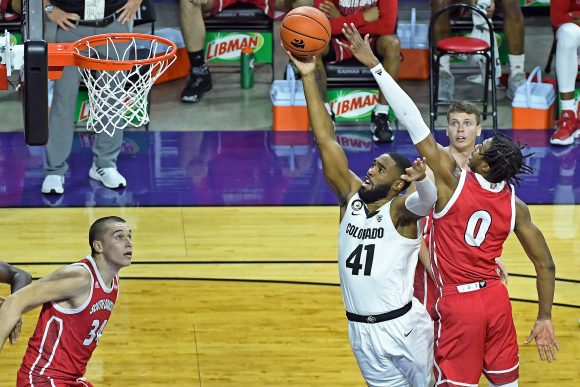 The Buffaloes maintained a healthy lead throughout the second half, fluctuating between 18 and 25 points. Four players scored in double figures for Boyle’s squad Wednesday night, led by Wright IV with 20.

Colorado wraps up The Little Apple Classic on Friday, Nov. 27 against Kansas State. Tip is set for 6:30 p.m. MST on ESPNU.

Battey, blocks and a balanced offense lead Buffs over...

Assist record another feather in the impressive cap of...