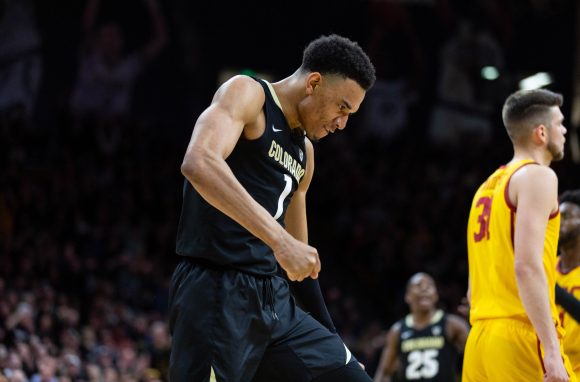 It may not have been the engrossing in-person experience that the NBA draft provides in most years, but it certainly wasn’t one that the Buffs will forget. On Wednesday night, University of Colorado men’s basketball forward Tyler Bey was selected with the 6th pick in the second round (36th overall) by the Philadelphia 76ers before being traded later in the night to the Dallas Mavericks. The trade also sent veteran shooting guard Josh Richardson to the Mavs in exchange for Stephen Curry’s younger brother, Seth Curry.

Coming out of Las Vegas, Nevada as a four-star recruit, Bey chose Colorado over offers from fellow Pac-12 members Utah and Arizona State. After three seasons in Boulder, where he earned the 2019 Pac-12 Defensive Player of the Year award, first-team All-Pac 12 honors in 2019 and second-team All Pac-12 honors in 2020, he declared for the NBA Draft following his junior season.

At this year’s NBA combine, Bey went on to set the record for max vertical (43.5 inches) for a forward, showing off his tremendous physical talent. Going into the draft, he was projected to be a late first-round or early second-round pick, a projection that would come true by the end of the evening.

With his selection on Wednesday night, Bey became the 35th player from CU to be drafted into the NBA, 69 years after Wayne Tucker became the first in 1951. He also became the first Buff to be drafted by the Sixers since point guard Chuck Williams was taken in 1968, and the first since small forward Andre Roberson in 2013 to be a draft night trading piece (that deal sent Roberson to Oklahoma City after being drafted by Minnesota with the 26th overall pick).

With the selection of Bey, CU head coach Tad Boyle has now produced six draft picks since the beginning of his tenure in 2010 with three coming in the last four years.

“(I’m) very excited for Tyler and his family,” Boyle said. “Every kid that that comes to Colorado comes with dreams of hopefully someday playing in the NBA. and not everybody’s going to experience that reality… Any time you’re a part of helping kids reach their dream, it’s very, very gratifying.”

“They’re (Dallas) getting a tremendous athlete who’s going to make plays that not too many people can make physically… He’s also going to be a guy who’s going to grow and develop and get better as he acclimates to the NBA game,” he continued. “He’s got all the physical tools, and now it’s a matter of him just getting back in the gym and using his work ethic to continue to improve and grow into the player that Dallas is going to appreciate.”