CU women’s soccer goes on the attack for signing day 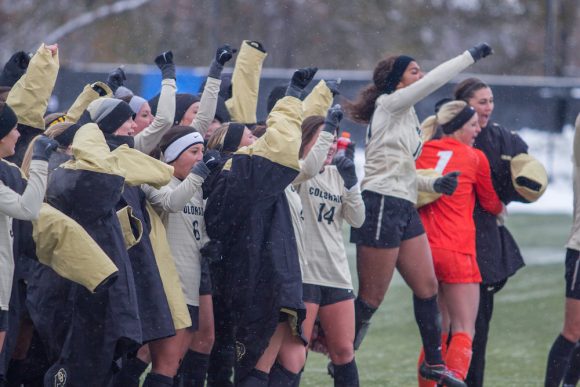 The CU soccer team sings the fight song with their supporters after defeating BYU 2-0 in the first round of the NCAA tournament. (Matt Sisneros/CU Independent)

The University of Colorado women’s soccer team kicked off the NCAA’s early signing period with four new recruits. Amongst them are national level players and recipients of numerous awards.

Head coach Danny Sanchez has begun his preparations for the team’s expected season in the spring while also looking towards the future of the program. Sanchez took advantage of National Signing Day, bringing some new flair to CU soccer.

From Hawaii, Phoenix Miranda is bringing strength in the midfield. With a 5-foot-9 height that will lead to a helpful advantage in the air, she could excel close to the net. Miranda has participated in US Youth National Team camps, was rated No. 40 by the IMG Academy Top 150 and was ranked as the 16th best defender in the country.

Sanchez talked about Miranda’s strengths in the midfield as leading the attack from behind. He also described Miranda as a “very good passer.” With a new member of the team pushing from the back, Miranda will certainly bring a sense of urgency and speed to the game.

From across the Atlantic, CU will gain a new attack player with a large amount of experience in her home of Glamorgan, U.K., Ellen Jones. Playing primarily in the midfield, Jones has represented her country at the U17, U18 and U19 levels. She got a taste of U.S. soccer playing against Team USA U17 twice.

Sanchez said her experience will be invaluable and as a new signing, CU soccer fans are excited for a new attack player to watch and help grow over the next few years. No other soccer Buff has hailed from the U.K. until Jones.

Sanchez continued his focus on his attack position, bringing in another attack with international recognition, Hannah Duguid. Sanchez said Duguid “will really bring a spark to our attack” and is “crafty on the dribble and a natural playmaker.”

Duguid comes to CU from Calgary, Alberta, and has already won several awards including the 2016 Top Female Player in HLSA International Camp and the 2016 Christine Sinclair award at the SKF Calgary Gothia Cup.

Sanchez did not forget about his defense and midfield, bringing in the highly talented Holly Hunter. Hunter, who was a member of the U.S. Deaf Soccer National Women’s Team, was a nominee for USA Soccer’s 2019 Player of the Year with Disability.

The superlatives only continue with Hunter. Sanchez highlighted her versatility as an outside back and as a holding central midfielder. Hunter comes from Temecula, California and played with some of the top teams in the state, the So Cal Blues and Legends FC.

While the status of Spring 2021 is still unknown, CU soccer supporters will have a lot to look forward to in its class of 2025.