CU women’s soccer not kicking back during extended offseason 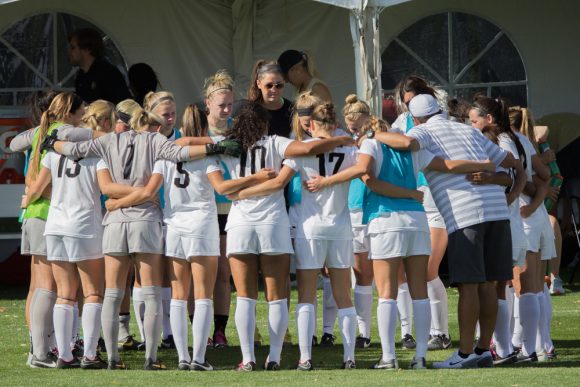 The CU soccer team huddles up before kickoff against No. 18 Washington. (Matt Sisneros/CU Independent File)

The past few months of college athletics have not been typical. The women’s soccer season would usually take place in the fall, but that did not happen with the coronavirus pandemic. Instead, adjustments have been made, and the University of Colorado women’s soccer team has been quick on their feet to adapt.

While there was no fall season, there will be a spring season and an NCAA tournament scheduled for the end of April and into May. Yet for Pac-12 teams, it is still unclear how the season will look.

CU began practice on Aug. 15 but was limited in what they could do in terms of contact. Shortly thereafter, the city of Boulder announced an ordinance in place that prohibited gatherings of more than two people between the ages of 18-22 which put a pause on what the team could do for a few weeks.

“We knew that this fall season would be a lot of stop and go, so that’s what it has been and we’re just looking forward to the spring,” said head coach Danny Sanchez.

Once the ordinance was lifted, the team began to train with safety precautions and the Buffs will continue to do so until Thanksgiving break when classes move completely remote.

The Buffs will have workouts to do at home to stay on top of their fitness. The hope is that preseason practice will begin in January and games will commence in February. This month of November will give players the opportunity to separate themselves before the team gets back together in January.

“We are really looking at this November time to really amp it up before we shut it down for six weeks or so,” Sanchez said.

Another obstacle that has faced many teams during the pandemic has been the development of team chemistry with limited in-person contact. The team has not been able to do activities off-campus, including team meals. Sanchez said he was impressed with his incoming freshmen throughout the pandemic.

“Fortunately for us, we have a good group back in and the freshmen really did a good job incorporating themselves,” Sanchez said. “This first semester has been challenging but we’re really pleased with how they’ve dealt with the adversity.”

From CU’s athletic trainer to the staff in sports medicine, the dietitians and the nutritionists, Sanchez said a lot of effort in many areas has gotten the Buffs moving towards a potential spring season.

“They have done a lot of work to get us to the point where we can train and where we can be healthy (and) to kind of keep a normalcy,” Sanchez said.

While the spring season is yet to be fully formed, Sanchez and the Buffs look forward to regrouping at Prentup Field and perhaps to celebrate a win.