“Pieces of the Road,” a nostalgic tribute to the American West 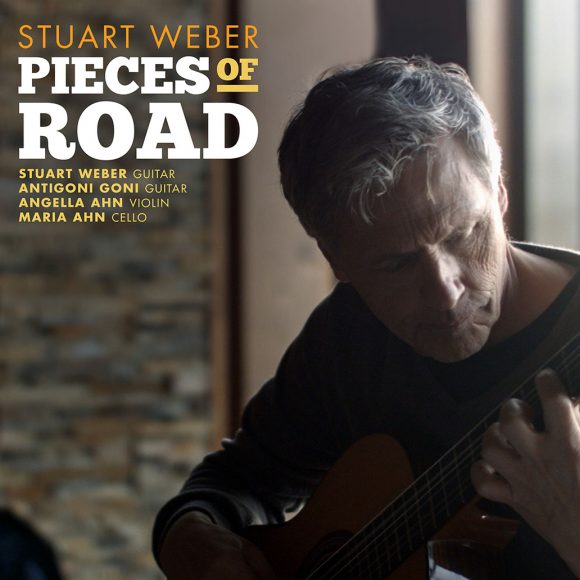 Nostalgia fills Stuart Weber’s “Pieces of the Road.” On his eighth album, released Oct. 9, the Montana native reminisces about growing up in the rural American West. With his earthy, Americana style on classical guitar, Weber yearns for a simpler past—of family trips on bumpy, dirt roads and of elderly couples’ enduring love—yet he also accepts the inevitability of modernization.

From a young age, the American West inspired Weber’s music.

“I think my biggest influence of all is the environment,” Weber said. “Growing up, I knew I wanted to be an artist and describe the world around me.”

Self-taught on acoustic guitar, Weber’s early education came from listening to 1960s folk, Americana and fingerstyle guitarists. He later learned to play classical guitar, studying with Christopher Parkening, an American guitar virtuoso. His passion for both genres grew and he felt stuck in between the acoustic and classical guitar worlds.

“I couldn’t decide for a long time whether I would be marketed as a classical guitarist with a quirky, unscripted, unschooled side or if I was just going to be this Charlie Russell of the American West, documenting the scene around me,” he said.

Weber decided to stay true to both passions, creating his signature sound: classical music with an acoustic folk twist. After his debut classical album “Evening in the Country,” he began recording original music on his second album, “Hired Man’s Dream” (1993), followed by five more original albums. His eighth and latest album “Pieces of the Road” is the shortest so far at 14 minutes and features only two works, “Anniversary Waltz” and the title track.

“Anniversary Waltz” is a charming quartet for two guitars, violin and cello, composed by Weber and arranged by Mason Kaye. Comforting, dulcet melodies on violin and cello float above the dynamic guitar line. The guitars later emerge from the texture, leading a graceful, cantabile musical dialogue.

The waltz was inspired by Weber’s childhood memory of an elderly couple’s anniversary dance.

“This couple walked out on the floor and was a little shaky and stumbling,” Weber recalled. “The guy seemed to need an extra step to catch up to it, so I kept throwing in these measures of 4/4 time in the waltz. But when they got into their dancing, they both really remembered being young and spry—how he used to sweep her off her feet. They had their memories.”

Weber believed “Anniversary Waltz” is a “high water mark artistically” for him because he “got to work with such great people.” He recorded the waltz in New York with Antigoni Goni, a renowned Greek classical guitarist, and two members of The Ahn Trio, violinist Angella Ahn and cellist Maria Ahn. For the recording, Weber used two guitars by the luthier Jeff Elliott. To combine different timbres, he played on a cedar guitar with a warmer sound, while Goni played on a spruce guitar with a brighter sound.

“(Antigoni) is really good. It was fun to work with her. I can see why people have so much respect for her playing,” Weber said. “Angella and Maria also have this capacity to take full advantage of their instrument yet not go over half-volume. They can play actively and emotionally in the range that the guitar exists. I am grateful to Angella for her sensitivity in that playing.”

The second track, “Pieces of the Road,” features only solo guitar, like most of Weber’s compositions. “Pieces of the Road” consists of three movements: “I. The Old Way,” “II. Sunken Highways” and “III. Sweetgrass Hills.” “I. The Old Way” is an energetic tribute to forgotten old roads, now paved over and modernized, from family road trips. The next movement, which is about an old flooded highway, is filled with lush rolled chords, flowing like running water. The final movement, inspired by the gravel road to his grandparents’ house, has an animated, bouncy bassline, interspersed with gentle chords.

“I am looking back on those old roads, those stories and how we got to where we were going,” Weber said. “(The third movement is about) the old road we would take to the ranch, up near Canada, by the Sweet Grass Hills — this windy, hilly gravel road, which has now of course been completely straightened out and flattened. It’s not nearly as fun now.”

Yet despite the bittersweet, Weber seems to find comfort and beauty in nostalgia.

Listen to “Pieces of the Road” here. The rest of Weber’s discography can be found here.