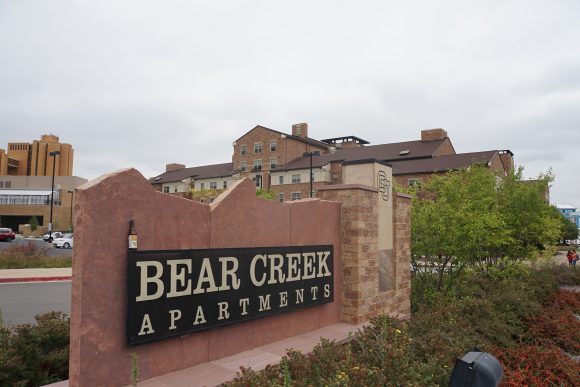 Several University of Colorado Boulder students living in Bear Creek Apartments received a Reddit notification in late September claiming that students who tested positive for coronavirus were being transferred into the apartments, sparking concern because the University did not inform them.

Though no one knows which apartments the COVID positive students have been staying in during their isolation period, several Bear Creek residents felt uneasy about the fact that they could potentially come across an infected student without even knowing it.

A student who wishes to remain anonymous claimed he had also read the post and is “just as worried as (everyone).”

“I think it is worrisome, but we’re in a unique situation where we don’t really have contact with isolating students … unlike residence halls,” he said.

“The University should’ve most definitely notified us that we were going to be housing isolation rooms … I also understand their perspective on the situation … I know that notifying us was in (the university’s) mind but was most likely on the lower end of their priority list.”

A major concern for students is whether it is riskier to evacuate the buildings in the case that the fire alarm goes off. Evacuation makes it difficult to maintain social distancing requirements and there is always the potential for students to forget their masks because they feel rushed to leave the building.

Abby Mohlis, a Bear Creek resident, claims she feels uncomfortable knowing that infected students were transferred into the apartments. According to Mohlis, her roommate called CU Health Services in which it was confirmed that seven students who tested positive for coronavirus were staying in one of Bear Creek buildings. Due to the Health Insurance Portability and Accountability Act (HIPPAA), no one can know for sure what part of the building the infected students are isolating.

Recently, Bear Creek had an evacuation because of an emergency, which made Mohlis feel uneasy.

“Because of HIPAA, we don’t know which buildings or apartments they are (in), so we could have been in close contact with infected people while evacuating,” Mohlis said. “I was not even aware that isolating students in Bear Creek was a possibility until it was confirmed.”

Mohlis explained that she has made an effort to be as cautious as possible. Finding out that infected people are living in the same “unregulated and uncontrolled” building as her has made her feel “quite upset.”

Though students and employees of Residence Life are concerned about the current situation, Laura Arroyo, Director for Housing Administration said that the spaces infected students are using are in no way connected to spaces occupied by healthy students and that transferring students into Bear Creek was “in full support of CDC, public health, local, state and university recommendations for safety related to COVID-19.”

Arroyo also noted that it is challenging to address everyone’s questions and worries because “student concerns and parent concerns often look very different.” Arroyo later mentioned that their best approach is to “provide information in a variety of ways so that students and families can find (it) in a way that meets their needs.”

“All of us, including staff and faculty, have never lived through a pandemic,” Arroyo said. “It can be a worrisome and isolating experience, but if we take the approach that we are in this together as one Buff family, I do believe we can get through this.”