Buffs offensive and defensive lines impress and QB competition has escalated:  What we learned from Dorrell’s update 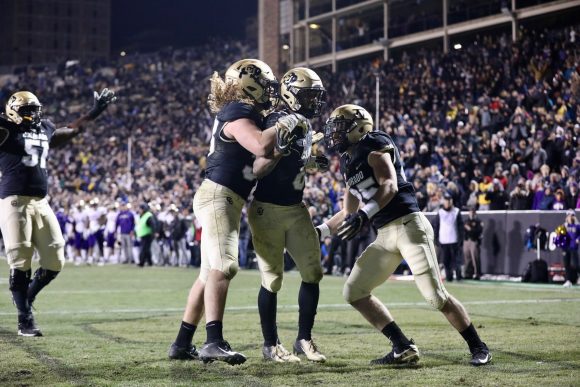 The Buffs celebrate a TD by Alex Fontenot during the third quarter of play at Folsom Field. Nov. 23, 2019 (Nigel Amstock/CU Independent)

University of Colorado head football coach Karl Dorrell gave an update on the Buffs state of affairs on Wednesday in the latest round of a Pac-12 hosted Zoom video conference. Dorrell discussed the development of freshman quarterback Brendon Lewis and the preparation for his inaugural season leading the black and gold.

The Pac-12 football season was originally slated for 2021 but after other Power 5 conferences began suiting up this fall, the Pac-12 adjusted to a Nov. 7 restart- much to the appeasement of Dorrell’s Buffs.

“We’re excited that we get a chance to have a good fall season here,” Dorrell said. “I know that all of us in the Pac-12 have dealt with many issues during this pandemic, going from March to this point. We’re really excited that our conference and the members of our executive teams got together and decided to give us an opportunity to play this fall.”

Highly-touted Buffs QB recruit Brendon Lewis has made a strong case for an opportunity to play this fall according to Dorrell. Lewis has already smashed QB weight room records at CU as he looks to fill the shoes of fellow Texan Steven Montez.

“He (Lewis) has done a really nice job transitioning here and getting comfortable with our staff,” Dorrell said. “I have been very, very impressed with him. He is an extremely talented kid, a tremendous athlete. He has a really good arm. His challenge, like most people in their first year, is picking up our system, being able to perform in a timely manner.”

Competing with Lewis will be senior Sam Noyer, who opted to stay in Boulder after considering the transfer portal upon graduation, and junior Tyler Lytle. CU will have just 25 practices to crown a quarterback.

“Normally when you are in this scenario, you go through a battle in the spring and you kind of have an idea- you have some summer work,” Dorrell said. “We’re just going to have to do that all in one time. To be honest with you, it isn’t something I have done before in my career. It is what it is given our circumstances. We’re going to make the best assessment we can during these 25 practices.”

Whether it’s Lewis, Lytle or Noyer on Nov. 7, none of them can easily succeed without a strong offensive line. Dorrel said he has been impressed by the Buffs up front on both sides of the ball during his first eight months in Boulder.

“Probably our deepest and most experienced groups have been our offensive and defensive lines,” Dorrell said. “We had some returners that had some starting experience, that had some production. As a new coach, (if there’s) any place that you want some experience, it would be upfront. I think those groups are going to be solid for us.”

Players to watch on the O-line include junior right tackle William Sherman and senior left guard Kary Kutsch, both of whom started all 12 games in 2019. Defensively, it’s hard to look past 6-foot-7 junior defensive end Terrance Lang and senior Mustafa Johnson.

It will be a new-look team for the Buffs in 2020 without Montez and Laviska Shenault Jr., and a new look season in the age of COVID-19. Regardless of who follows Ralphie (fingers crossed on her appearance) onto Folsom Field against UCLA on Nov. 7, Dorrell believes there will be an increased sense of gratitude for the fall pastime.

“In the games played on the professional level and the guys playing in college, you can tell there is a level of appreciation that probably went by the wayside in normal circumstances,” Dorrell said. “That is the one thing that tells us about this great game that we have, that is part of the fabric of our society. We can’t take this game for granted. It is a blessing to play. I think this year with how trying it has been for all walks of life, that there is a level of appreciation that is probably higher than it has ever been before.”