Karl Dorrell and Chauncey Billups speak at Black Male Summit, “A Sense of Where We Are” 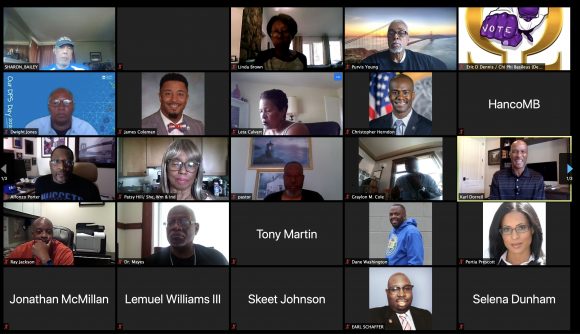 The Colorado Black Round Table and Joint Effort Community Sports hosted a virtual Black Male Summit, “A Sense of Where We Are” on Sept. 19, 2020.

The Colorado Black Round Table Executive Director John Bailey opened the sports portion of the panel by welcoming first-year CU head coach Dorrell to the summit and back to the state of Colorado. Dorrell talked briefly about the impact of his upbringing and his role as a Black head coach in light of the Black Lives Matter movement triggered by the recent surge in police brutality across the country.

“There’s a level of responsibility I feel,” Dorrell said. “I feel that way in almost any aspect of my career and my job. I’ve always felt that I have to attack my profession with a great standard of integrity and character and reputation; all the things that my parents brought me up as a youth, the things that were important in life.”

Dorrell opened up about a childhood experience that had a lasting impact on him and continues to influence his approach in life and his career. Following the murder of George Floyd in Minneapolis, Dorrell said he told his team about how his family traveled across the country in the late 1960s when Dorrell’s father, a former navy officer, was stationed in California. His family felt the safest time to travel from their home in Jacksonville, Florida to California was in the middle of the night to avoid any attention.

“It’s amazing the transformation of time where we’ve been dealing with racism and prejudice and obviously my parents were in the meat of that as a young family (with) the things they had to do to create peace for themselves,” Dorrell said. “A lot of it was to just get out of people’s way and being respectful and things of that nature. So, I was brought up that way…I had to make a difference. I had to show that our culture has some very dynamic people and I wanted to be kind of a representation of that from an early standpoint just because I always felt like I had to prove myself.”

While he didn’t think too much of the experience as a kid, Dorrell said it taught him the perseverance that helped craft the work ethic he carries with him today.

“My parents said life isn’t fair, it’s not going to be fair,” Dorell said. “We’re going to have to do a little bit more than others to achieve the goals and aspirations that we set for ourselves, and they were completely right. I was prepared that way as a youth to work, to earn everything that I achieved. We’ve all dealt with a level of these injustices growing up. I’ll just speak for myself. For our Black American family, we just felt that that was normal. For us to get ahead, we’re going to have to do more than everyone else. I’ve had that attitude really in everything that I’ve done in life.”

Dorrell’s work ethic and approach to his career helped him land his position at CU, his second head coaching job at the collegiate level, which is something Dorrell noted is difficult and rare for people of color within sports. Given his position as head coach of the Buffs, Dorrell echoed his previous point regarding the high level of responsibility that comes with his role as a Black head coach. Especially during this time where the reaction to violence against Black Americans has helped to spotlight the racial injustices and systemic racism that plagues our society.

“I take a lot of pride in this chair that I’m sitting in right now just because I believe that this time in our life, in our culture, in our society, we actually are a big part of the narrative now,” Dorrell said. “We are the instrument of change. I think our young Black males (are); at least the ones I’m in charge of right now here at the University of Colorado. And it’s not just our Black males, all of our young people that I am leading right now, I want them to feel that they are the best opportunity for us to really get this thing done, to change and get our country where there’s a level playing field.”

Being a leader for young men is something Dorrell prioritizes even before football. Chauncey Billups helped reinforce the sentiment, talking about his childhood growing up alongside his younger brother and the importance of having those role models and supportive people in addition to your parents.

“Having two parents and growing up in the inner (city) is uncommon,” Billups said. “But we didn’t just have our parents. There’s so many people in the neighborhood that helped raise us. Not only did I have great leadership at home, we had it everywhere we went, our family’s houses, the rec center, the teams that we played on. Growing up in the neighborhood and playing football and basketball, those coaches become like father figures to you.”

Both Billups and Dorrell emphasized the importance of leadership and having a support system. For Billups, recognizing how fortunate he was to have the people around him helped him develop empathy for others, something he touched on toward the end of the summit.

“We were really lucky,” Billups said. “I didn’t know how lucky I was until I got a little bit older and I started to understand and know that my support system was different than everybody else’s. That makes you have a level of empathy for everybody else that doesn’t have that support system, that doesn’t have two parents in the house, both of them working. It was just a rare situation.”

Billups said his circumstances allowed him to take advantage of the chance to play basketball collegially and ultimately professionally.

“It was no secret that that support system and that structure propelled me to have the opportunity to stay focused on what I wanted to be in my life because I didn’t have to worry about what was going on at home, or where we were going to be staying next week, or what we were going to be eating tomorrow,” Billups said. “I didn’t have everything I wanted, but I had everything I needed.”

Dorrell concluded with a message that both he and Billups now share as role models and leaders in positions to influence and impact the people they connect with.