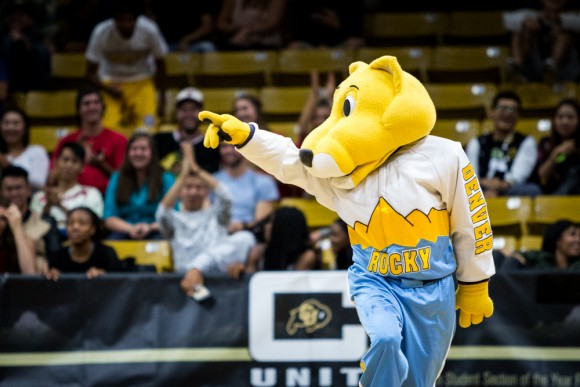 Nuggets mascot “Rocky” points to the crowd at the CU Events Center in 2015. (Matt Sisneros/CU Independent)

On Tuesday, the Denver Nuggets overcame a 3-1 series deficit in the NBA’s Western Conference Semifinals against the Los Angeles Clippers. Playing in the Walt Disney World Bubble in Orlando, Denver guard Jamal Murray and center Nikola Jokic showed poise in Game 7, defeating the Clippers 104-89 after going down as many as 11 points in the first half.

Denver was down 3-1 to the Clippers on Sept. 9 and was favored by few to win the series. After coming back from a 3-1 deficit against the Utah Jazz in the Western Conference Quarterfinals, the Nuggets pulled off a minor miracle to win the next 3 games once again. Denver became the first team in NBA history to climb out of two 3-1 deficits.

Murray scored 40 points in the win and converted on 6-of-13 three-pointers to help the Nuggets past the finish line. The University of Kentucky alum cemented his name in the record books as his 9 field goals in the second quarter tied the most in a playoff quarter since the NBA began tracking the statistic in 1997. Jokic also impressed as he recorded a triple-double through three quarters, a feat no other NBA player has done in a Game 7.  His monster night included 16 points, 13 assists, 22 rebounds and three blocks. Their historic performances were exactly what the Nuggets needed in order to complete the upset against the Clippers.

Los Angeles struggled with guarding Murray and Jokic all series. Clippers’ guard’s Patrick Beverly and Lou Williams had no answer when asked how to guard Jokic and said that he is a special player in the post-game press conference.

After cutting the Clippers lead down to 2 in the first half, the Nuggets came out strong in the second half, outscoring LA by 10 in the third quarter. The Clippers looked tired and unlike the Nuggets, their star players were not performing when they needed them most. Two-time Finals MVP forward Kawhi Leonard was held to just 14 points and shot 6-of-22 from the field and forward Paul George scored 10 points on 16 shots, converting on just four of them.

The Nuggets entered the 4th quarter with an 8 point lead, 12 more minutes of good basketball would put them into the Western Conference Finals for the first time since 2009. Murray scored 12 points in the quarter and made a challenging fade-away three-pointer that secured an 18-point lead for Denver. Also impressive, Denver’s D held Leonard and George scoreless in the final quarter.

“Our goal was never to get to a Game 7,” said Denver Nuggets head coach Mike Malone after the game. “Our goal when we started this whole season was to win a championship. As outrageous as that may sound to people outside of our group, we never lost sight of that. We kept our belief in that.”

Denver will now face the West’s No. 1 seeded Los Angeles Lakers in the Western Conference Finals. Game 1 in Orlando is Friday at 7 pm MST.